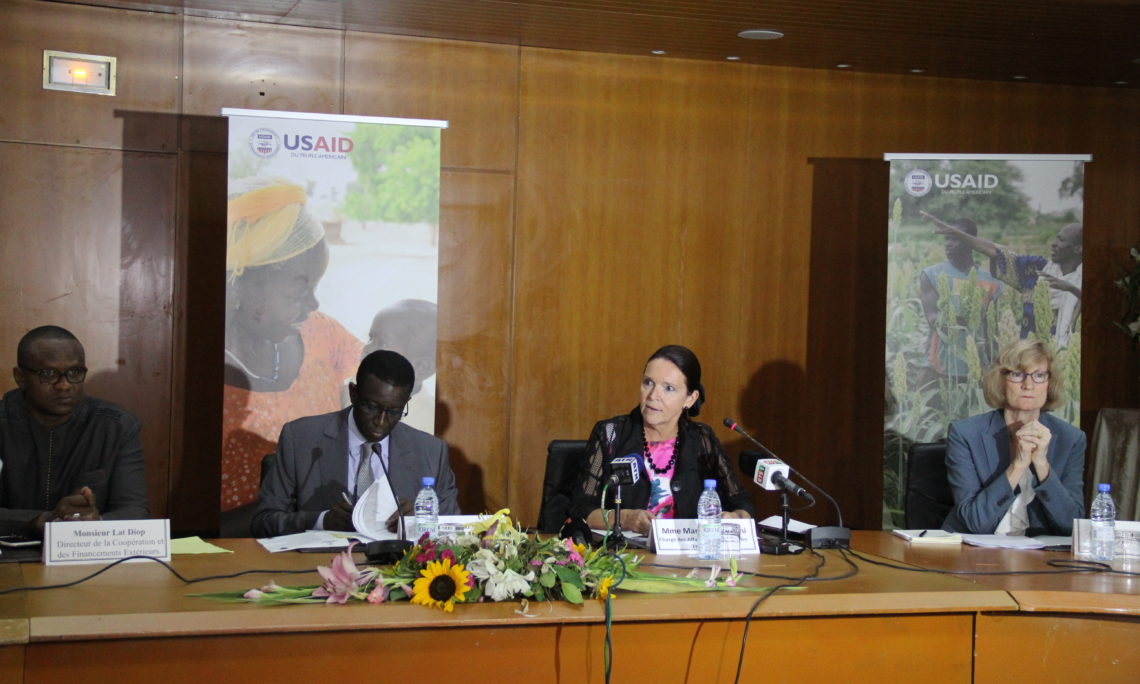 It is a pleasure to be here co-presiding over the review of the cooperation portfolio between the United States Agency for International Development and the Government of Senegal.

Since 1961, USAID has collaborated with the Government of Senegal, bringing technical advice and financial support in the economic growth, health, education, and governance domains.  Our mutual endeavors reflect the broad, deep, and dynamic partnership between our countries and highlight the shared goals of the people of Senegal and the people of the United States.

As in any successful partnership, it is important that we reflect on our accomplishments and our challenges, frankly and openly.  Today’s meeting is an opportunity to do that.

The Government of Senegal has shown broad vision and remarkable leadership which the United States is pleased to support through USAID programs amounting to $122 million (approximately 71 billion CFA) in 2016.

In the economic sector, the government has made huge progress in controlling illegal fishing in Senegalese waters.  The Minister of Fisheries re-invigorated the Commission Sous-Regionale de Pêche and signed an agreement with six countries to harmonize policies to reduce overfishing and conduct joint surveillance.  Just this month, the Senegalese navy detained seven foreign vessels for illegally fishing off the Casamance coastline.

In the domain of trade and investment climate, the Minister of Commerce leads regional trade integration, implementing an investment climate and trade facilitation regime that is responsive to the needs of foreign and domestic investors.  The Ministry will also soon launch an online portal to automate the clearance of goods through customs, which will reduce costs to investors.

In the agricultural sector, USAID facilitates financing for rice, maize, and millet producers, improves nutrition for rural communities, and supports mechanisms to reduce risk to private investors.  For example, in 2016, more than 4,500 producers took advantage of ‘rain insurance,’ and $25 million was loaned through private banks that now accept rice as collateral.

In USAID investment zones, the poverty rate fell by three percent and chronic malnutrition by seven percent in 2016 alone, contributing to the Government of Senegal’s goal of reducing chronic malnutrition 20 percent by 2021.  Another result of our effective partnership was Mango Week, and the subsequent creation of the West African Mango Alliance, which joins producers, exporters, government leaders and technicians together to strengthen regional trade and cooperation.

While progress has been impressive, slow implementation of key reforms is constraining the government’s ability to meet its goals.  Delays in essential ‘enabling environment’ reforms, such as land tenure and financial market liberalization, and inadequate transparency of large public investment, limit investor confidence.

In the health sector, the government has made remarkable improvement in access to modern family planning and in reducing malaria, infectious disease risk, and maternal and child death.  Senegal is close to eliminating malaria in the North and is a leader in West Africa due to the expertise of the National Malaria Control Program.

Despite important advances, the government must urgently take more financial responsibility for family planning commodities to achieve the government’s target of 45% contraceptive prevalence by 2020.  Continued effort is also needed to recruit, train, and deploy qualified health professionals to rural areas, incentivize placement of staff in underserved areas and develop a local recruitment strategy.

In the education sector, USAID will provide $72 million (approximately 42 billion CFA) over the next five years for the Programme Nationale de Lecture, a transformative approach to improve reading performance, key to both individual success and sustainable and inclusive economic growth.

To ensure the success of the Programme d’Amélioration de la Qualité, de l’Equité, et de la Transparence (PAQUET), we urge the government to finance the Ministry of Education’s information management system – SIMEN.  This system will modernize the education system, improve oversight of teacher and school performance, and help ensure efficient use of all human and material resources.

In the governance sector, progress is also evident.  Implementation of the fichier unifié des données de personnel continues, as well as enforcement of the ethics code, which, with consistent application, will improve citizen confidence in the government.  There is also progress to improve public financial management, transfer the ordinancement du budget d’investissment to line ministries to put in place appropriate control and managerial capacity.  Moreover, we applaud the Ministere de Gouvernace Local and Delimitation de Territorial National for producing a draft strategy to train territorial development actors.

For several decades, our partnership with the government has included collaboration to help resolve conflict in the Casamance, where USAID programs on conflict mitigation and management have achieved good results.  We look forward to continuing our engagement with communities in the region to reinforce the government’s work toward a peaceful and durable resolution of the conflict.

These are all excellent examples.  I would be remiss, however, if I did not mention that greater momentum is required to respond to citizen demands for inclusion, opportunity, and basic services.  An adequate and timely resource transfer are needed, along with a tax code that creates revenue generation options for Collectivites Territoriales.  We agree that greater effort is needed to strengthen local government capacity.  At the same time, we support a transparent, performance-based formula for revenue sharing.  This would ensure an equitable and efficient use of public resources and allow for differentiated oversight dependent on managerial capacity.

I have talked a lot today because these programs and challenges are so important to us.  Overall, we commend the GOS, under the leadership of President Macky Sall, for a broad and meaningful reform agenda.  To achieve this impressive vision, we respectfully submit that an increased pace of reform is needed, along with more effective execution across the public administration.

What is most important, and what I want to reiterate, Mister Minister, is the United States’ deep and abiding commitment to the Senegalese people.

I am confident that our partnership will continue to be fruitful as we work together to support progress toward the ambitious development goals of President Sall’s plan for an emerging Senegal.

Thank you for your attention.