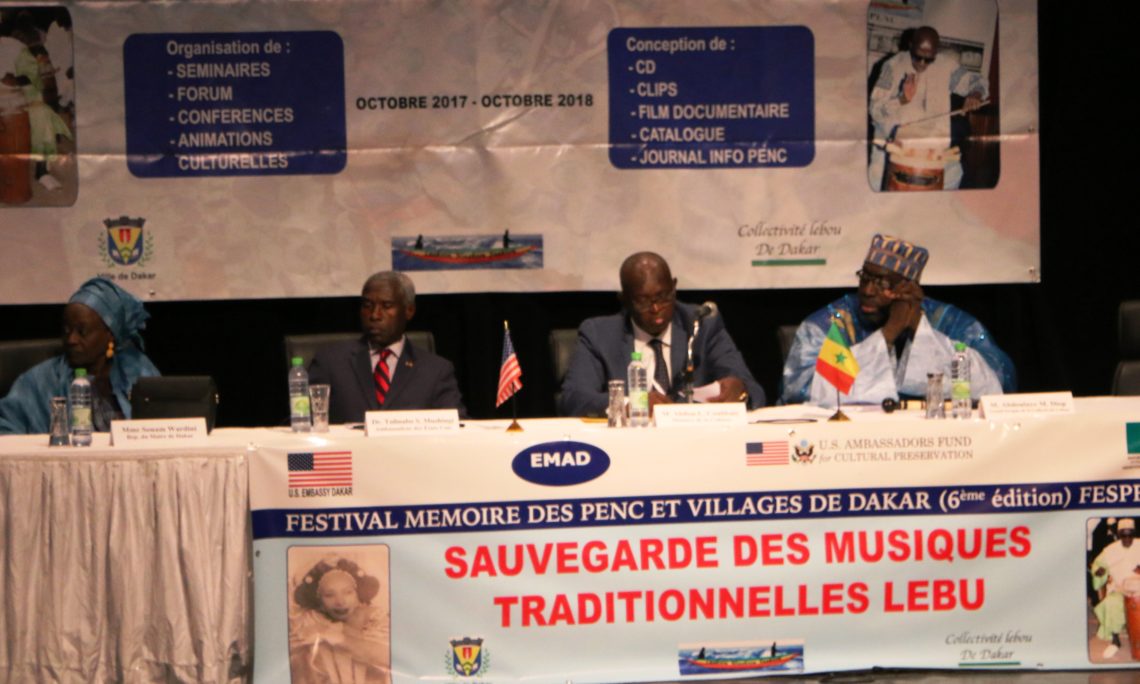 Minister of Culture
Grand Serigne of the Lebou Community
Representative of the Mayor of Dakar
Imam Ratib of Dakar
President of EMAD
Dear guests,

I am delighted to be here today at this ceremony to recognize the richness of Senegalese culture and the U.S. government’s partnership with organizations to help preserve this culture.  I am proud to announce today that the U.S. Embassy in Dakar has awarded a grant of $108,000 or almost 60,000,000 FCFA through the U.S. Ambassadors Fund for Cultural Preservation to the organization Entente des Mouvements Associations de Développement—or EMAD— to preserve the music of the Lebou community.  EMAD has been active for many years to preserve intangible cultural heritage and we are proud to be partnering with them on this project.

As in many communities and traditions, Lebou music is closely tied to ceremonial rites such as the Ndaw Rabin songs and drum rhythms that are performed by women during a festival to celebrate the start or the rainy season.  The preservation of art is closely linked to the preservation of cultural traditions.

Over the next 12 months, EMAD will gather members of the Lebou community, artists, and scholars through workshops and a forum and will bring traditional Lebou music to a larger audience through performances and the production of a book, CDs, and a documentary film.

I would like to congratulate EMAD for having been selected through a competitive process and I look forward to seeing the development of this project.  I would also like to recognize the Ministry of Culture’s partnership with EMAD and their important work to protect and promote Senegalese culture.

The U.S. Ambassadors Fund for Cultural Preservation was created in 2001 to support the preservation of cultural sites, cultural objects, and forms of traditional cultural expression around the world.  The Ministry of Culture, organizations like EMAD, and the U.S. government share the goal of protecting and preserving cultural heritage.

Protecting a country’s culture links people to their past and with each other.  A society’s future is strengthened when its history and culture are preserved.  Cultural preservation requires partnerships and collaborations with actors from across society.  And we can see that at this event today.  Distinguished representatives of government, of the religious community, of civil society, and of the general public have come together in recognition of the vibrancy of Senegalese culture and the importance to protect it.

The U.S. Embassy in Dakar is proud to partner with you not only to preserve a part of Senegalese culture for generations to come, but also to solidify the strong ties that exist between our two countries.

Congratulations again to EMAD and thank you!