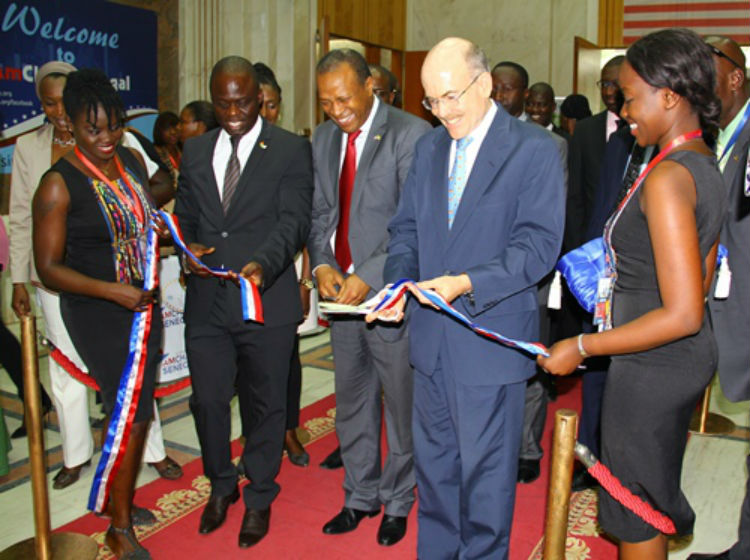 U.S. Ambassador to Senegal James Zumwalt, Mr. Augustin Yakhar FAYE, Chief of Staff of the Minister of Trade, and President of the American Chamber of Commerce in Senegal, Makha Racine Sy, presided over the opening ceremony of the 5th edition of the “American Week in Dakar” on May 27.  The theme of this fifth edition of USA Week, held May 27-29 at the King Fahd Palace, is “Senegal: Investment Destination”.

Organized by the Economic and Commercial Service of the U.S. Embassy and the American Chamber of Commerce in Senegal (AmCham), the American week celebrates many American and Senegalese companies working to strengthen business relations between Senegal and the United States. The theme and workshops of this edition will highlight the growing investment opportunities in Senegal with particular attention to agro-business, energy and IT sectors.

For the U.S. ambassador, this event is an occasion to celebrate the growing roster of U.S. firms that are investing in Senegal.  “Since 2003, our commercial ties to Senegal have expanded. Bilateral trade has grown from less than 40 billion Fcfa in 2003 to more than 100 billion Fcfa last year.  And this year, we have more than 30 companies participating in the fifth edition of USA Week.”

Zumwalt stated that “Several U.S. companies are supplying equipment for Senegalese investments in agriculture and infrastructure under the Plan Senegal Emergent.  Other U.S. companies are providing financial services and supporting microfinance organizations that provide loans for small entrepreneurs.” He added that Senegal is also a regional hub for U.S. technology companies operating in West Africa.

Through several editions since 2003, USA Week Dakar has built a reputation as the premier trade show in Dakar dedicated to strengthening the business relations between the U.S. and Senegal.