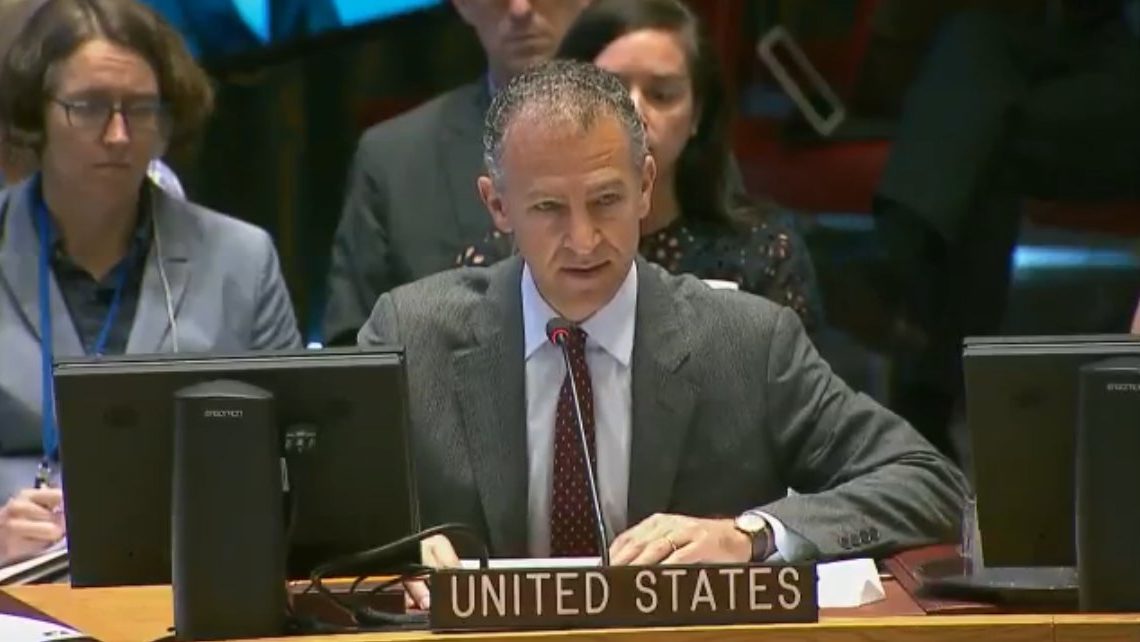 Thank you, Mr. President. And we thank Secretary-General Guterres and Commissioner Chergui for their briefings.

I, too, would like to begin by saying a few words in special tribute to the Malawian and Tanzanian UN peacekeepers and soldiers from the Congolese armed forces who were killed in the Congo last week. This is an important reminder to all of us that the decisions made in this chamber have real consequences for peacekeepers and their families. Our prayers are with the families of the men and women killed last week and with the wounded who survived.

Making our peacekeeping missions more effective and more accountable to the people they serve is a top priority for the United States. The African Union has been, and continues to be, a strong and necessary partner with the United Nations in advancing political, security, economic, and humanitarian goals in Africa. The relationship between these two organizations is unique and special. It must remain so.

Mr. President, the United States recognizes the sacrifices that the AU and African troop-contributing countries are already making to peacekeeping operations in Africa. Ethiopia alone has over 8,000 troops serving in UN peacekeeping operations and over 4,000 more in the AU Mission to Somalia. Burkina Faso has over 2,000 troops dedicated to UN peacekeeping, and last month it paid the ultimate price, losing two soldiers to a terrorist attack in Mali.

The question we are asked to address today is how can we improve the UN’s unique relationship with the African Union – not for the benefit of the organizations themselves, but to help the people of Africa build a peaceful and prosperous future. This is a question that deserves a focused, sustained, and honest conversation. Security Council members must not be rushed into making precedent-setting decisions without careful consideration of their consequences.

Many here today have called for the Security Council to make UN-assessed contributions available as a predictable and sustainable means of support for African peace support operations. This proposed action, in particular, demands that we pause to consider how this will aid peace, security, and human rights in Africa.

These resolutions – 2320 and 2378 – set out clear conditions for the African Union to meet before the Security Council could even consider using UN assessed contributions to fund AU peace support operations. These conditions include the expectation that the AU provide at least 25 percent of the cost of operations. The Security Council asked that there be full financial transparency and accountability. And we require that AU troops adhere to high performance standards and maintain good conduct and discipline with respect human rights.

Progress has been made, and we congratulate the AU for it. But more work is needed before the conditions set out by the Security Council can be considered to be fulfilled. It’s too soon to make decisions about changing the UN’s peacekeeping relationship with the AU when the AU is still working on its internal reforms.

Other issues lead the United States to believe that it’s premature to take this step now. There are serious and unanswered questions about how to protect the Security Council’s authority on matters related to international peace and security, in any future arrangement that supports AU peace support operations with UN assessed contributions.

And Security Council members must be given time to ensure that there is full political and legislative support from their capitals before making this commitment. The agreement of our Congress is an imperative for the United States. I know this is the case for other countries and their legislatures. And we will not be able to engage our new Congress on this important and complex issue until the New Year, which is the soonest we could consider joining consensus on a new resolution.

Mr. President, the United States is calling for more consideration before we commit UN funds to AU peace support operations. But it would be a mistake to interpret our caution as a lack of support for peace, security, and human rights on the African continent. The United States has long been and will remain the top United Nations contributor to UN peacekeeping missions.

But on top of our assessed funds, we are committed to helping troop-contributing countries prepare their troops for deployment to African UN peacekeeping operations. Since 2005, we have spent $1.5 billion on training support with 23 active partners in Africa. In 2018, the United States supported the training of military personnel in African peacekeeping missions in the Central African Republic, Mali, Congo, Darfur, Abyei, and South Sudan.

In short, the United States is committed to the future stability and prosperity of Africa. We are proud of our partnership with the AU and the many African troop-contributing countries.

In conclusion, we see today as a step forward in our shared effort to strengthen the UN’s partnership with the AU. A rushed process to make a decision in a matter of days that would change peacekeeping permanently would undercut our progress. Instead, let us continue the good work on all sides to bring these two organizations closer together, with respect for their unique roles, to help the people of Africa create the peaceful, secure, and prosperous future they deserve. Thank you.