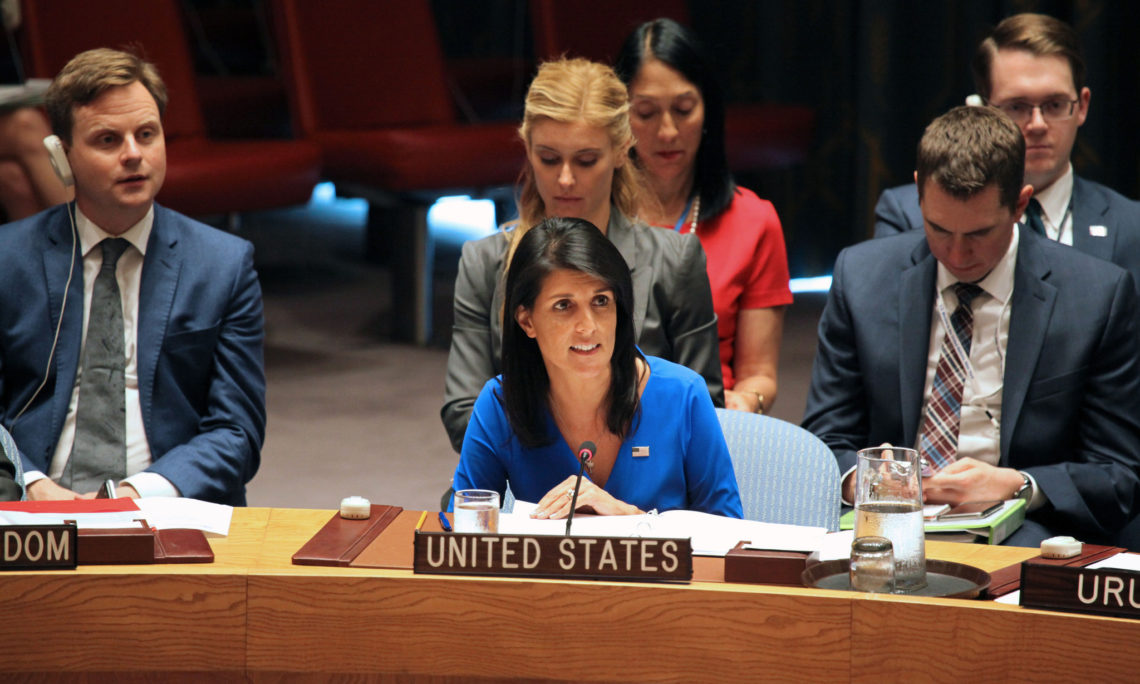 Thank you to our briefers, and thank you to China for organizing this very important debate.

Over the past couple of decades, a welcome shift has occurred in the international community’s relationship with Africa. The United States regards itself as a partner to Africa and looks to build on that relationship and strengthen it. And in a relationship of equals, responsibility falls on both parties to contribute to solutions. We applaud and encourage the increasing leadership the African Union and African Members States have exercised in contributing to peace operations and battling terrorist and insurgent groups. And today, we reaffirm the African Union’s role as an indispensable partner to both the United States and the United Nations in promoting peace and security in Africa.

But true progress cannot be achieved unless the efforts of the United Nations and others are accompanied by accountability on the part of governments involved in conflict. The developing famines in Africa are a tragic example of this. More than 14 million people are at risk of famine today in northeast Nigeria, Somalia, and South Sudan. This is a crisis that should be leading every newscast and on the front page of every newspaper.

The United States will continue to lead in bringing together resources to overcome this crisis. On July 8, we announced an additional $446 million in humanitarian assistance to suffering people from South Sudan, Nigeria, and Somalia, bringing the total for fiscal year 2017 to $1.4 billion. And we thank all the donors and communities hosting the displaced for their incredible generosity. But our ability to provide real relief is hampered by one inescapable fact: armed conflict is the primary cause of food insecurity in South Sudan, Nigeria, and Somalia.

Famine in Africa is an issue of peace and security. People are dying of hunger not due to acts of God, but acts of man. It is the parties to these conflicts that bear direct responsibility. They are responsible for the lack of access to people in need of food, water, and health services. They are responsible, as well, for the millions of refugees and internally displaced persons suffering in Africa today.

In Somalia, more than half the population is in need of humanitarian assistance. But ongoing violence – including deliberate attacks on aid workers – is preventing people from getting the assistance that they need. Al-Shabaab’s terrorist attacks, as well as logistical and administrative obstacles, are cutting off access to hard-hit rural areas. We urge the Federal Government of Somalia and the leadership of the interim Federal Member States to facilitate delivery of humanitarian goods. And we strongly call for an end to the use of illegal checkpoints by government-affiliated entities.

The manmade crisis in South Sudan has created the most refugees in Africa since the Rwandan genocide. This crisis would be much worse if it were not for neighbors like Uganda, which is taking in hundreds of South Sudanese every day. But the patience and generosity of humanitarians are being severely tested. Their efforts to lessen the suffering in South Sudan are being actively obstructed by the government and other parties.

These famines are a sign of a collective failure. And any effective response must begin with the nations of Africa themselves. AU Member States must ramp up their response to this crisis. AU Commission Chair Faki spoke for many of us when he said, “I cannot hide my deep frustration at the silence and inaction of Africans in the face of the terrible tragedy of famine in these regions.” We must continue to look for ways to bolster the capabilities of Member States to promote peace and security. The African Union must work with sub-regional organizations and individual states to confront peace and security challenges with one voice.

African nations must also work constructively with the United Nations to address an underlying cause of the conflict that is driving the risk of famine in Africa. I have spoken many times about the relationship of human rights violations to conflict. To its credit, the African Union has established a Hybrid Court in South Sudan to investigate and prosecute individuals who have violated human rights laws during this conflict. The establishment of this court and the message it will send is important and necessary if there is to be lasting peace in South Sudan.

Still, the commitment to promoting human rights must precede conflict – and take precedence over politics – in order to secure peace and security. When the nations of the African Group put forward a country like the Democratic Republic of Congo to be a member of the Human Rights Council, it does more than just weaken that body – it adds to the conflict that is causing so much suffering on that continent. This is a pivotal time for the Human Rights Council. It has the potential to be an asset to the men, women, and children suffering in Africa today. But it can only play that role if its membership consists of nations committed to promoting and upholding universal human rights. And that, in turn, depends on the African states putting forward credible candidates with strong human rights records. The nomination of the DRC is an inexcusable failure of this process.

My hope is that we can all summon the political will and courage to change the trajectory of the ongoing political and humanitarian crises in Africa. Famine should not exist in 2017. Our duty is to hold those responsible to account. The United States will continue to do its part.