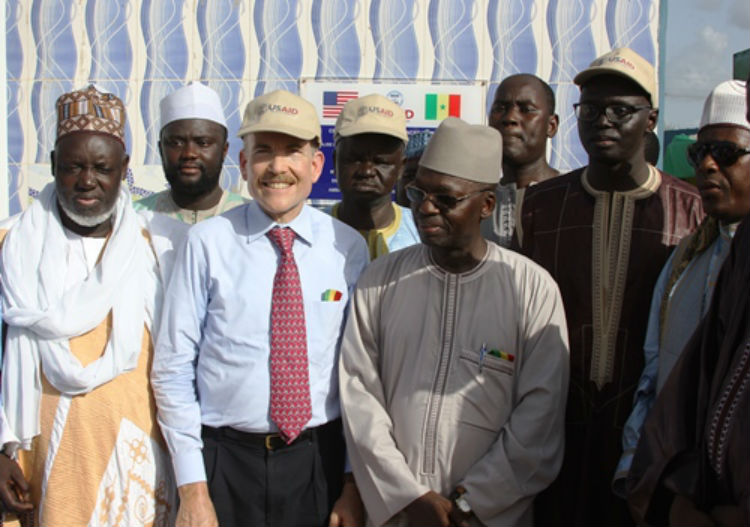 U.S. Ambassador to Senegal James P. Zumwalt joined local authorities and representatives of the agricultural sector to inaugurate a new Seed Treatment Center in Kaolack, Senegal’s breadbasket for cultivation of cereals like millet, maize and sorghum on September 2.

“Good seed makes for more resistant crops in areas with irregular rainfall,” Ambassador Zumwalt said.  Despite last year’s drought, farmers were still able to complete their harvest thanks to the hardy, drought-resistant seeds the center produced.

The already-functional facility specializes in the treatment and conditioning of high quality, “certified” cereal seeds to cover the needs of Kaolack and the surrounding regions of the Saloum.

This USAID assistance is provided as a strategic investment in Senegal’s agricultural self-sufficiency policy known as the Program for Accelerated Agriculture in Senegal (PRACAS).

KASEC installed a new versatile seed processing and packaging unit with a capacity of 1.5 tons per hour and a 66 KVA generator. USAID also provided KASEC with working capital and helped finance construction of new infrastructure at the site.

The Kaolack facility is the third of its kind of be rehabilitated with USAID assistance, joining similar centers in Kolda and Richard Toll.  Together, they will revitalize the seed sector and support the certification system for cereals.  The centers complement three USAID-equipped seed laboratories and two research stations, representing a total investment of $1.7 million

These activities were implemented by the Economic Growth Project, which evolved into Feed the Future Senegal Naatal Mbay in May 2015.

Taken together, these investments will help farmers access certified seeds, see better returns, rise above the subsistence level thanks to the opportunities that present themselves through the Cereal Corridors initiative.