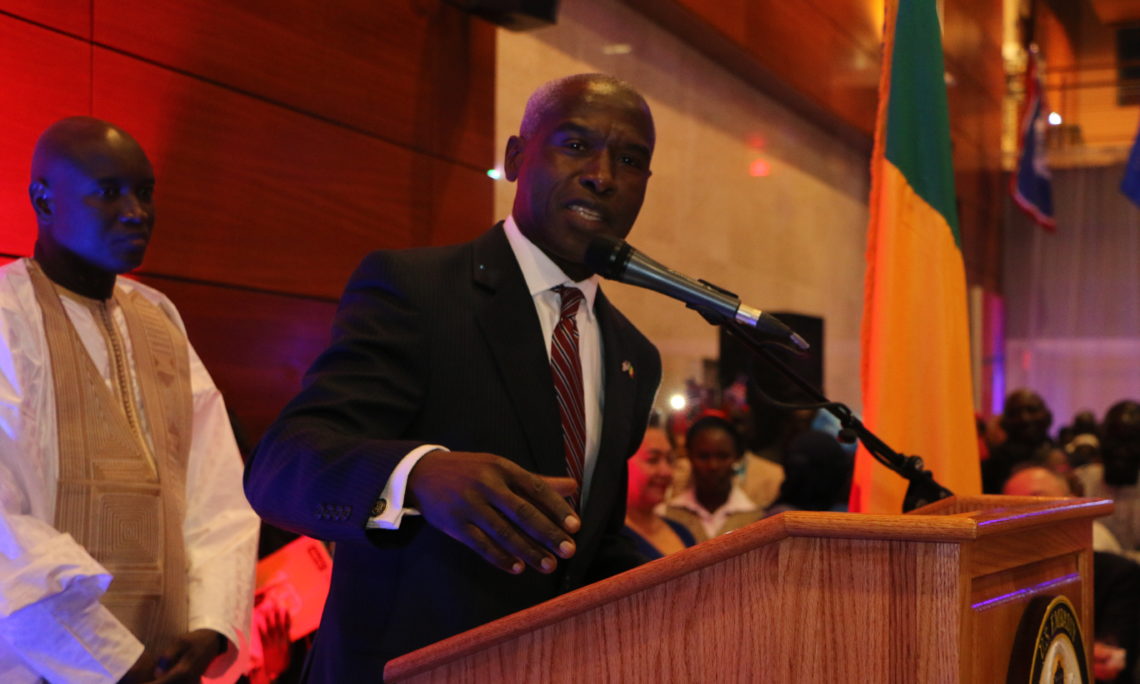 Good evening.  What an honor to be surrounded by so many friends and colleagues. Rebecca and I are delighted you could make it.

I promise to be brief – the goal of tonight is to mingle and celebrate – but I wanted to share a few thoughts on our bilateral relationship and the theme of this evening: the deeply rooted connections between the United States of America and Senegal.

This is my first Fourth of July Reception in Senegal since arriving last summer, and I have spent the past twelve months traveling across the 14 regions of Senegal – visiting some several times –  and have tremendously enjoyed getting to know this beautiful and diverse country. From the falls in Kédougou westward to the island of shells in Joal Fadiouth, and from the Senegal river flowing along the border with Mauritania south to the Casamance.

The diversity of this country is stunning.

And as you look around this atrium, you will notice 50 flags representing our fifty states. Each one tells a different story, history, accent, geography, demographics – from Michigan to Texas, and from California to Maine, spanning the Atlantic to the Pacific. I saw the same spread of diversity during my travels in Senegal.

One thing that struck me on all my visits across the country of Teranaga is how connected our two countries are – whether visiting health huts in Fatick, the American Corner in Thies, or the USDA Food for Education programs in St. Louis.  I saw American agencies involved in security trainings, entrepreneurship programs, health and democracy workshops. And I saw Peace Corp volunteers across the country and heard about their work and what they had learned from their host families.

A Wolof proverb reads:  “The giant tree grows from a grain”

I interpret this to mean that everything great takes time. Time to cultivate, time to develop.

Celebrity Chef and Dakar native Pierre Thiam is someone who understands this.  Pierre worked his way from a bus boy in NYC to becoming one America’s most known chefs. Today he pays homage to traditional West African cuisine through his thoughtful approach to food.

Based in New York City, Pierre introduces contemporary interpretations of ethnic flavors to diverse clients, including the UN Secretary General, and hires Americans in the process.  He is also working to import and promote founio in the U.S. as a new superfood, quite literally bringing a taste of Senegal to American tables.  Thiam is a leading advocate for responsible tourism, as well as a spokesperson for the rich culinary history of Africa and its Diaspora.

NBA star and Louga native Gorgui Dieng also epitomizes this connection.  Dieng started his career attending the Sports for Education and Economic Development Academy—or SEED Academy– in Thies before attending university in Kentucky, and being drafted by the Minnesota Timberwolves.

Despite an impressive career in the NBA, Dieng has remained committed to his community and roots and has used his influence to help effect change here at home for health care and agriculture projects in Senegal.

We are all truly interconnected. Whether through our cooperative work to bring peace and stability to the region, our efforts to find ways to jointly prosper through investment and trade — or our many people to people connections through exchange and cultural programming.

Our prosperity is mutual, and the success of the United States and Senegal are linked.

Tonight, as you walked in, you saw booths from the more than 43 American companies that work in Senegal. There is growing excitement about investing in Senegal.  Whether oil and gas, electricity, even telecommunications, our bilateral trade increases every year and Senegal is poised to become an economic leader in the region.

“Whoever saves one life, saves all of humanity.” This poignant quote can be found in both the Talmud, the primary source of Jewish law, and the Qur’an.  It illustrates that we are deeply connected in our efforts to promote peace and security in the region and around the world.

Our collaboration is extensive and longstanding.

Through programs like the State Partnership, which links Senegal and the state of Vermont, exercises like Flintlock, which recently brought the USS Mount Whitney to Dakar, and operations like Junction Rain, which just finalized patrolling the maritime borders of the region, the armed forces of Senegal and the United States work together to confront regional challenges and share our experiences. Thousands of soldiers have trained side- by-side to ensure security both here and abroad. These programs build our mutual capacities and further strengthen the connections between our two countries.

Martin Luther King, Jr. once said: “Whatever affects one directly, affects all indirectly.”

While our economic and security bonds are strong, they are built upon, and contribute to, what I believe are the greatest connections between Senegal and the United States: our people-to-people ties.

Even before I came to Senegal, I had heard about Issa Kouyaté. Issa had participated in an exchange program with the State Department, after founding a shelter for street children.  Called la Maison de la Gare, the shelter has become a home for hundreds of children who are beaten and left alone in the streets.

Issa is committed to improving the lives of such street children and promoting their human rights.

He has created strong partnerships with local government agencies, religious communities, and other organizations working to combat human trafficking.  For his work, he was named a Trafficking in Persons hero and honored by the U.S. Secretary of State.

Issa is just one of over a thousand Senegalese who have participated in U.S.-sponsored exchange programs.

Perhaps the program that best embodies the interconnectedness between Senegal and the United States is the Peace Corps. Of course, I am a bit biased since I served as a Peace Corps country director for ___ years.