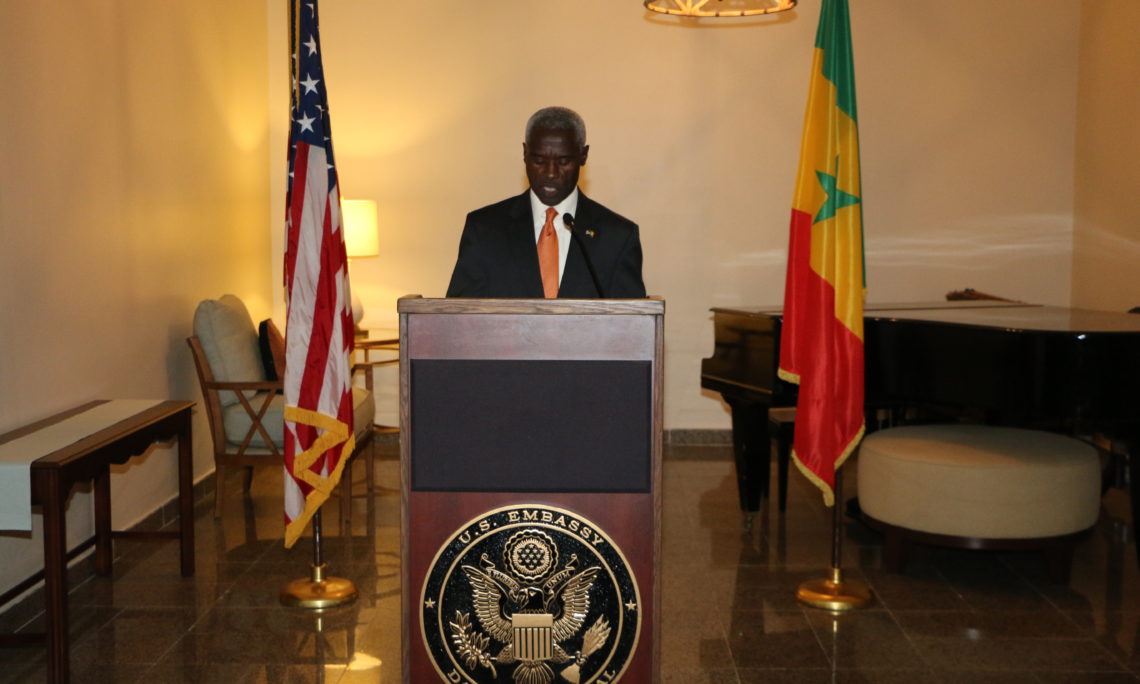 My wife, Rebecca, and I are delighted to welcome you to our home.  We were looking forward to welcoming a visiting delegation from the Smithsonian National Museum of African American History and Culture in Washington, D.C., but as you have heard, due to an unforeseen urgent situation the trip had to be postponed.

The delegation sends their regrets and is looking forward to rescheduling their visit to Senegal in the near future.

This reception was not only to welcome the delegation, but also to welcome you to our home in recognition of Black History Month and to reaffirm the strong ties between the United States and Senegal.

Last week, Rebecca and I visited Gorée and we were warmly welcomed by all whom we met.  We learned about the many cultural activities that take place on the island and also saw first-hand how the histories of our two countries are tied.

I would like to share with you now a short video highlighting the visit and my impressions of this important historical site.

My trip to Gorée was an opportunity to reflect, not only on the connections between our two countries, but also on the advances that have been made throughout history.  This same reflection takes place during Black History Month.

Slave ships left Gorée bound for the United States and other countries across the Atlantic.  Today our two countries are working together to document our shared history.  We know that by preserving the past we can learn from the tragedies of history and form new bonds.

I know that many of you in this room and involved with the preservation of that history.

Last week’s trip to Gorée was a part of my own personal history.  The first time I visited Gorée was in the 1970s as a tourist.  I had no idea that I would return, some 40 years later, as the Ambassador representing the United States to Senegal.  Though the history of a person’s life or of a country may have its twists and turns, the overall trend is one of growth and progress.

During Black History Month, we remember the progress that was fought for and won in the United States.  As Martin Luther King, Jr. said, “the arc of the moral universe is long, but it bends toward justice.”  Black History Month is a time to acknowledge and remember the injustices of slavery, segregation, and discrimination.  But it is also a time to reflect on the accomplishments and impact of African-American leaders, artists, activists, and citizens on American culture.

As an American of African descent, I recognize and commemorate both the fight for civil rights and what has been achieved.

We can see this progress through the courage and determination of generations of African-Americans who fought for their rights during the Civil Rights Movement and other periods of history.  They contributed to the richness of American life.  They helped create, as the U.S. Constitution says, “a more perfect union.”

We have with us tonight, the top two contestants who will be reciting their winning renditions.

It is my pleasure to introduce and turn the floor over to the first place winner, Saliou Ndiaye, with Reverend Jesse Jackson’s “Keep Hope Alive” speech and the second place winner, Mame Khary Thiaw, with Maya Angelou’s poem, “Still I Rise” by Maya Angelou.