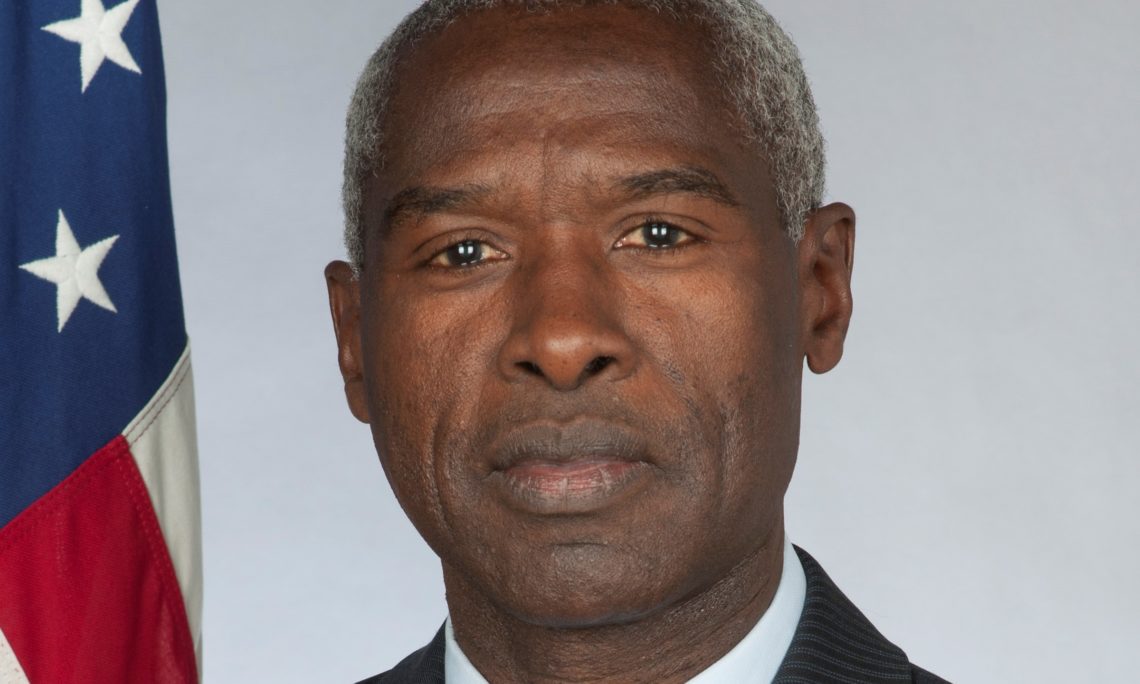 Good afternoon General Gueye, Admiral Diagne, ladies and gentlemen.  Thank you Admiral for your very warm welcome.  I am very happy to be here today for my first visit to the Dakar Naval Base, la Base navale Amiral Faye GASSAMA.  The United States Navy and Senegal’s Marine Nationale have an enduring, robust, and mutually beneficial relationship.

The United States is a nation of the sea, with a long maritime boundary. Like many other international partners, we depend on the maritime domain for a large portion of our commercial and economic success. The true prosperity of a maritime nation requires good stewardship in this area. The illicit trafficking of people and narcotics causes harm to our societies. Illegal fishing, and the illicit traffic of goods and marine pollution are causing damage to our societies. Solutions to these ills cannot be implemented by a single government entity or even by a single country. Maritime insecurity in strategic places such as the Gulf of Guinea can affect us all. In addition, those engaged in illicit activities in the maritime field will use borders to avoid prosecution. For these reasons, we must work together in the maritime domain. We all benefit from efforts to help build the capabilities of our maritime partners.

Today the United States turns over to Senegal, two 38 foot, DEFIANT class Metal Shark vessels through our continued partnership for the strengthening of Senegal’s maritime border.  Senegal’s Marine Nationale is vital to the security of not only the Gulf of Guinea, but to the continent’s entire North-West maritime border.  The Marine Nationale not only proves to be a deterrent and capable force against illegal fishing operations, but also against smugglers of illicit cargo who wish to do us harm.  As we have seen with recent maritime activities with Senegal’s neighbors, Marine Nationale professionals have a challenging and dangerous job.  But they do it well, day in and day out – always on watch to protect Senegal and its regional partners.

Through annual exercises and training engagements, Senegal and the United States continue to strengthen each other’s maritime forces.  Through a sustained commitment to the annual Africa Maritime Law Enforcement Program engagement, OPERATION JUNCTION RAIN, Senegal stands out in its capability to counter maritime threats such as illegal fishing, illicit trafficking, and piracy, and as a regional leader in training neighboring partners in these capabilities.  Senegal also continues to set the example in the annual OBANGAME EXPRESS exercise as a regional leader and advanced partner. US personnel continue to gain valuable insight and techniques from every engagement opportunity with the Marine Nationale.  As partners we practice, share, and refine a wide array of maritime operations’ procedures including water safety, inspection procedures, and search capabilities.  Senegal is also the regional leader in Zone G, in the Yaoundé Code of Conduct, once again distinguishing itself as an effective regional lead for maritime security operations.  Metal Shark vessels will only enhance these capabilities.

The Metal Shark 38 foot DEFIANT is one of the most sought after vessels around the world.  The vessels have a range of 400 nautical miles while carrying a crew of eight sailors in the pilot house. The boats will reach speeds in excess of forty knots, making them both incredibly fast and durable.

The vessels delivered today are the fourth and fifth patrol boats turned over to the Senegalese Navy as part of a six-vessel package valued at approximately two and a half  billion francs CFA (five million U.S. Dollars).  The first three were previously delivered and are already being put to good use by the Marine Nationale.  Together, these five Metal Sharks contribute significantly to Senegal’s formidable regional maritime capacity.   The United States looks forward to continued engagement with our maritime partner, the Marine Nationale.  Thank you again for the opportunity to visit Amiral Faye GASSAMA.  I wish you continued maritime success.