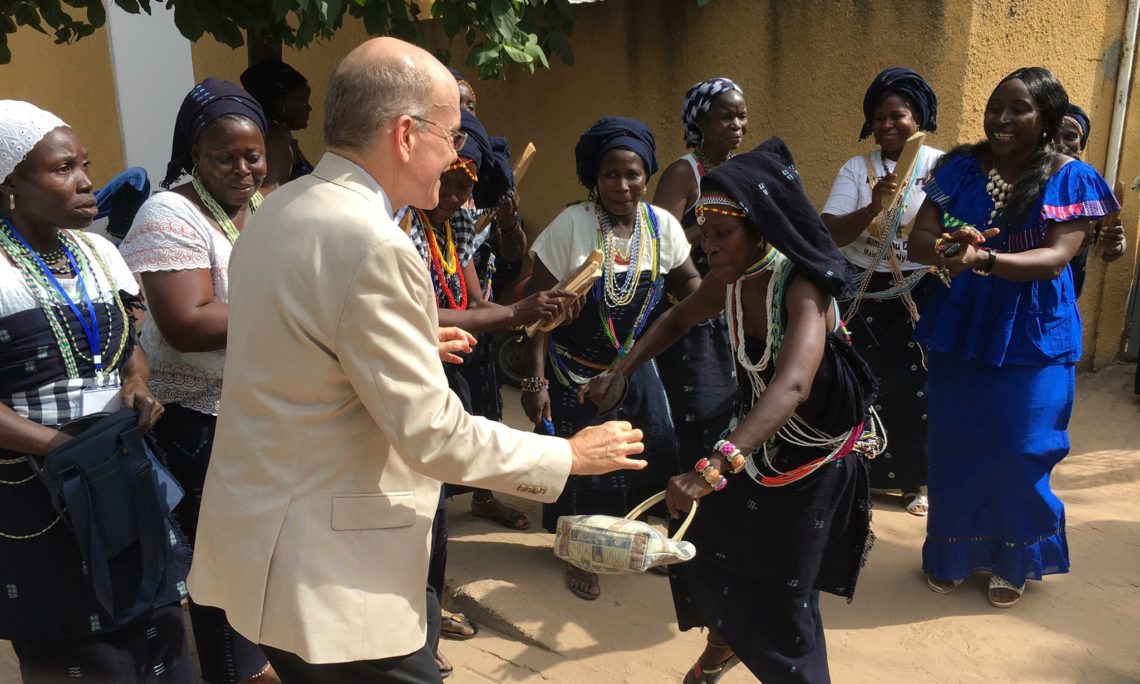 The purpose of the visit was to review progress on a range of U.S. Government-funded projects, such as addressing risks from landmines, building roads, educating children, providing health care and creating new economic opportunities.  Through these projects, the United States is accompanying the people of the Casamance along the “chemin de la paix” as they chart a path towards a better future.

Ambassador Zumwalt drew attention to an actual “chemin de la paix” in the village of Samine, where he inaugurated the newly rebuilt road that reconnects the countryside to regional markets. The road from Samine to the border of Guinea-Bissau is part of the 130 kilometers of farm-to-market roads rehabilitated in the Casamance since 2013 by the U.S. NGO Shelter for Life, with funding from the U.S. Department of Agriculture.

In Ziguinchor, the Ambassador met with women beneficiaries of the USAID Women’s Leadership and Civic Journalism Project, which was designed to provide opportunities for women to acquire the knowledge, skills, and confidence to become leaders in their communities. “The strong women of the Casamance can become forceful advocates for the peace process if they acquire the necessary tools, knowledge, skills, and resources,” said the Ambassador.  On this visit, the Ambassador met many young women who had been trained to become journalists.  They are now reporting on gender based issues affecting their communities thereby empowering other women with information on citizens’ rights and other current issues.

Also in Ziguinchor, the Ambassador met with USAID implementing partners , including the Synapse Center, which have been working towards achieving peace in the Casamance for more than a decade.  The following day, he met with L’Association d’Appui aux Initiative de Paix et Developpement (AIPD) in Fogni to discuss their efforts to lower poverty rates and support civil society capacity building. USAID has provided nearly 1.2 million dollars to 11 partners, including AIPD, for a three-year project covering 14 community forests.

Back in Ziguinchor, he met with the Plateforme des Femmes pour la Paix en Casamance, an organization that works to unify women’s associations in the Casamance and work collectively towards peace.

In Kabrousse, he honored the memory of Aline Sitoé Diatta, a Casamançaise resistance heroine, by laying a wreath at the tomb of her only daughter, and later participated in a call-in radio show on Zig FM, Carrefour de la paix.

The Ambassador has travelled five times to the region since he began his tour in Senegal, calling it one of his favorite parts of his job. Over the radio, he reaffirmed the United States commitment to help find a durable solution for peace in the Casamance.

“Four years ago, President Sall invited the United States to join his effort to create space for dialogue and negotiation. We stand by our commitment to help wherever we can be useful in this important work. This commitment is important to me as the U.S. Ambassador in Dakar. I continue working to promote dialogue, and so will the next U.S. Ambassador, in partnership with the government of Senegal and all who desire peace,” said the Ambassador during the show.

In partnership with the Government of Senegal, the U.S. Embassy in Dakar strives to keep the lines of communication open to achieve an end to the Casamance conflict.  As part of that effort, two U.S. Embassy officials continued the practice of U.S. government representatives meeting with the Mouvement des forces démocratiques de la Casamance  to listen to their views on the peace process.