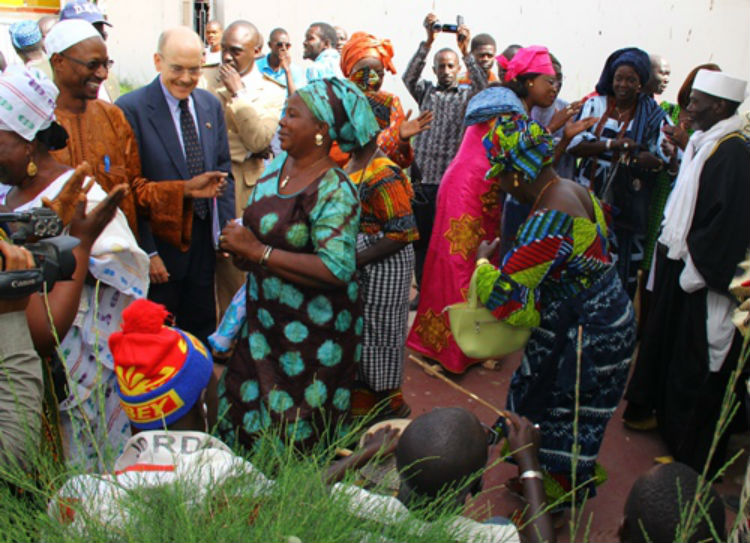 Ambassador Zumwalt opens the Serere None exhibit (Photo US Embassy)

U.S. Ambassador James Zumwalt presided over the ceremony for the Opening of the Serere None Exhibit in early March.  The result of a project launched two years ago as part of the Ambassador’s Fund for Cultural Preservation, the funds allocated to the Musée de Thiès ensured the safeguarding and documentation of traditional music of the Serer None ethnic group.

As a result of the hard work of performers and the representatives of the Serere None community, there are now digital audio and video archives of these traditions for the enjoyment of the broader public and for researchers.  More importantly, some of the community elders trained the next generation of musicians on how to make their traditional instruments.  “By passing along these skills, the music comes to life, and becomes a source of income and pride for the next generation of Serere None artists,” said Ambassador Zumwalt at the ceremony.

The project was funded through the Ambassador’s Fund for Cultural Preservation of the United States Embassy to Senegal.  This fund was developed in 2001 to help preserve cultural sites, cultural objects, and forms of traditional cultural expression in countries like Senegal.  By preserving and passing down cultural traditions from generation to generation, Senegalese can celebrate their culture as a source of national pride.  In addition, to the Serere None project, the Ambassador’s Fund for Cultural Preservation has funded other facets of Senegal’s heritage.  For example, in 2007 the fund assisted an exhibit highlighting the important role of women’s history in Senegal.  The fund has also supported the preservation of photographs and documents for the Leopold Sedar Senghor museum and updated display and storage of African art at Museum of Theodore Monod, in Dakar.