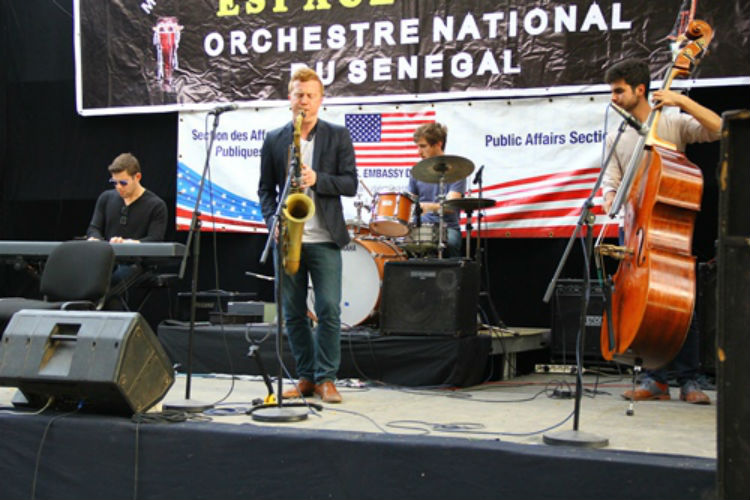 On the occasion of Jazz Appreciation Month, the American jazz ensemble “Adam Larson Quartet” toured Senegal from April 16 to 25 as part of a 35-day African tour that took the group to Benin, Democratic Republic of Congo, Senegal and Togo.  This trip was sponsored by the Cultural and Education Affairs Bureau of the State Department and took place under the American Music Abroad program.  Through concerts, educational activities and direct contact with local people, American Music Abroad encourages respect and mutual comprehension.

During their visit the group gave free concerts and took part in professional exchanges with Senegalese musicians from around Dakar, Rufisque, and Saint-Louis that the Public Affairs Section of the U.S. Embassy in Dakar organized at the Daniel Sorano National Theatre, the Douta Seck Cultural Center, Just 4U nightclub, Maurice Guèye Socio-Cultural Center (Rufisque), Village Pilote, and the French Institute (Saint-Louis).  At Douta Seck Cultural Center, on the margins of workshops with the Guissé Brothers and the National Orchestra, 40 National Arts School students received certificates following the Quartet’s four-day training program.

The Adam Larson Quartet is composed of bandleader and saxophonist Adam Larson, pianist Steven Feifke, bassist Martin Nevin and drummer Jason Burger, the Adam Larson Quartet formed in 2008 as a result of the vibrant jazz scene in New York, and has been performing consistently ever since.  Larson has led the group at venues in New York City such as The Jazz Gallery, The Blue Note, Dizzy’s Club Coca-Cola, The Kitano, Smalls and several others across the Tri-State area, as well as internationally.  An equal opportunist bandleader, Larson’s quartet draws upon the improvisational prowess and compositional skill of each band member.  Performing primarily original music as well as select arrangements from composers around the world, the band finds influence from musicians as varied as John Coltrane, Bach, The Beatles, Maurice Ravel, and Snoop Dogg among others, all of whom contribute to the Quartet’s unique sound.