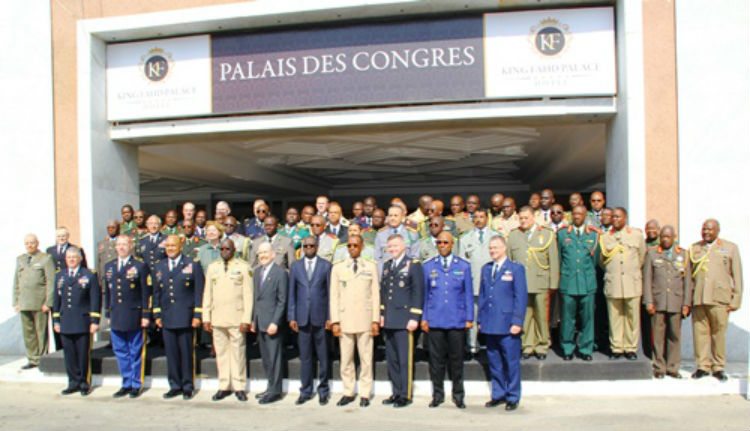 Lineup of African Service Chiefs at the Summit (Photo US Embassy)

African Land Forces Summit 2015 kicked off on February 9 with Army chiefs-of-staff from 36 African nations in attendance.  The event, otherwise known as ALFS, will take place February 9-12 in Dakar, Senegal.  Attendees — all general officers from countries spanning the African continent — will conduct meetings to address mutual interests and concerns, as well as have a chance to solidify relationships.

This year’s theme is “Training the Force for a Range of Military Operations.”  Discussion topics will range from African security challenges, peace support operations and institutional adaptation, followed by group discussions of the topics.

Gen. David G. Perkins, Commanding General, U.S. Army Training and Doctrine Command, said at the opening ceremony that the foundation of our future accomplishments — together with African partners — is providing peace and security:  “The real payback on that and the endstate is an environment in which we can have political prosperity, economic prosperity, cultural prosperity, all those things that people around the world look for, is a defined quality of life.”

Addressing the delegates, U.S. Ambassador to Senegal Jim Zumwalt said: “As soldiers and diplomats, we stand on common ground to carry out instructions of our leaders to build security and peace.  Soldiers and diplomats are partners just as Africans and Americans are partners.  We share a common goal of achieving peace, security, and economic prosperity in our societies.”  Zumwalt also told the Summit that:  “Today we will focus discussions on peace and security, but we all understand that enduring peace and stability are essential prerequisites for economic growth.”

Senegal Armed Force Minister Augustin Tine applauded the U.S. for seeking a closer security partnership with Africa, and expressed the “availability of Senegal to open up to other African Defense Forces.”