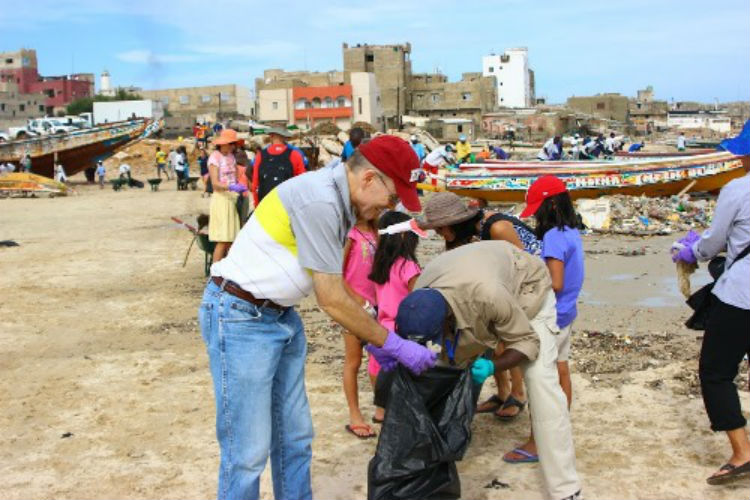 In September 2015 more than eight million kilograms (18 million pounds) of trash—equivalent to the weight of more than 100 Boeing 737s—was collected from across the globe by nearly 800,000 volunteers during Ocean Conservancy’s 2015 International Coastal Cleanup according to a new report (PDF 8.6 MB) released at the United Nations Environment Assembly (UNEA-2).

Senegal participated in this effort, with over 200 volunteers collecting over 5,000 kilograms of trash from Yoff beach.  “Most of the trash we see here today is not local.  Trash that is discarded in ravines washes out to the oceans when it rains.  Then currents bring it back to the beach,” said Deputy Chief of Mission, Sandra Clark at the September event.  “So when you drop a plastic tea cup in Ouakam, or you toss a candy wrapper out of the window of the car on the autoroute, or leave a plastic bag of trash in a canal, all of it ends up on our beaches.” This means that everyone has a role to play in keeping our beaches clean and our waterways free from plastic debris. Clark went on to say, “Coastal pollution affects everyone.  It is not just about aesthetics and a dirty beach. Marine life ingests the trash floating in the water and it hurts the quality and quantity of fish available for fishing.”

Plastic debris remains a growing concern in the marine environment, and the top three commonly collected items in Senegal were plastic beverage bottles, food wrappers, and other plastic bags. All are forms of plastic debris, and all can harm marine life and reduce fishing stocks, thus cutting into a critical food supply here in Senegal.

According to the recently released report, some of the more unusual items found in the cleanup included: 97 TV sets, 28 refrigerators, 39 toilets, and 54 bicycles.

Ocean Conservancy’s Ocean Trash Index is the world’s largest item-by-item, location-by-location database of trash found in near-shore environments. Over 30 years, more than 225 million items of trash have been logged and removed from our beaches and waterways.

“This database is the cumulative result of more than 11.5 million volunteers helping us to better assess the problem of trash in near-shore environments over 30 years, and they have my immense gratitude,” said Nicholas Mallos, director of Ocean Conservancy’s Trash Free Seas program.

Such clean-up efforts are part of the larger effort to clean up our oceans.  September 15-16, 2016, U.S. Secretary of State John F. Kerry will host the third Our Ocean conference in Washington, DC. We are excited about Senegal’s important role in the region to promote the Our Ocean Conference objectives.

The Our Ocean 2016 conference will bring together heads of state, scientists, business leaders, NGOs, and others to tackle key issues including marine protected areas, sustainable fisheries, marine pollution, and climate-related impacts on the ocean. This year’s event, titled “Our Ocean, One Future,” will build on international commitments to protect the ocean made at the previous two conferences.  To celebrate the start of National Ocean Month, Secretary Kerry met with students at Montgomery Blair High School in Silver Spring, Maryland, on June 1, 2016, to discuss ocean protection and other environmental issues.