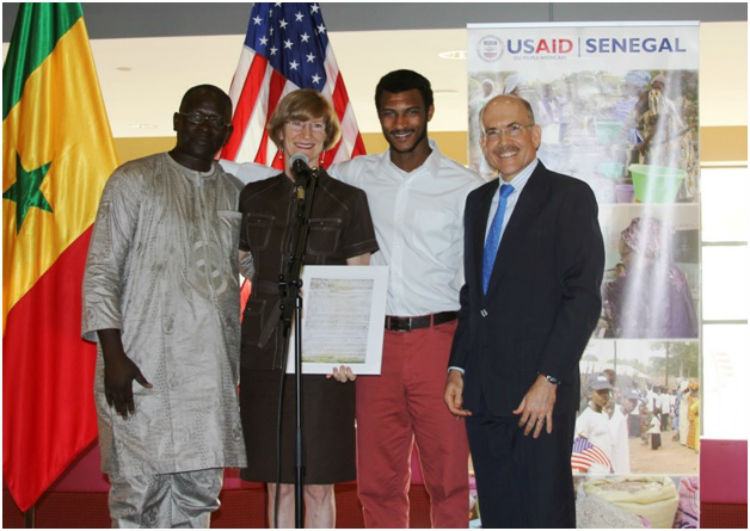 On December 3, Lisa Franchett was sworn in as the new Director of the U.S. Agency for International Development (USAID) in Senegal. The ceremony, the first ever for the Senegal mission to be held in Dakar, was presided over by U.S. Ambassador James P. Zumwalt. The ceremony was also attended by outgoing Mission Director Susan Fine, who will continue her work with USAID as a senior advisor based in Washington, DC.

Ms. Franchett will lead both the Senegal bilateral mission and the Sahel Regional Office, which works to build resilience in Mauritania, Niger and Burkina Faso.

At the ceremony, Ambassador Zumwalt remarked that he was pleased that the leadership of USAID gave the position to someone who with extensive experience and knowledge of Senegal and of the mission’s activities. In 2014, Franchett returned for her third tour in Senegal as Deputy Director. Her elevation from Deputy to Mission Director is another first for the mission. “Since my arrival, I’ve worked closely with Susan and Lisa,” Ambassador Zumwalt said. “I would first like to congratulate Susan for her excellent work, which facilitated the transition for Lisa. There could be no better choice than Lisa, who is an expert in development and has strong ties with the country. I am delighted to accompany herim in pursuit to pursue the achievement of USAID’s the overall objective of USAID is to helping Senegal improve the lives of its people.” Ambassador Zumwalt told Ms. Franchett that she is taking over the mission “at an exciting time for USAID” in the country. USAID/Senegal, which managesis one of the fastest growing portfolios in the region and supports, by supporting priorities such as presidential initiatives in the fight against climate change, Feed the Future, and the President’s Malaria Initiative.

For her part, Franchett said that she had seen remarkable progress in Senegal after her improbable return in 2014, noting the new asset declaration law for politicians, reduction by half in infant mortality, and a 44 percent increase in rice production over the last five years. “The staff here at USAID has contributed to many of those accomplishment,” she said. “I am very proud of the team that I will lead.”

Still, she said, challenges remain: a government more responsive to the expectations of its citizenry, opportunity for the burgeoning youth population, and an education system that produces practically-educated leaders of the future.

Franchett ascends to Mission Director after 26 years career with USAID. She previously served as Director of the Office of Education with USAID / Egypt (2012-2014), and before that, as Deputy Director of the Regional Office for West Africa in Accra, Ghana.

Franchett first worked in Senegal in the 1990s, and again from 2004 to 2009 after working in Ghana, South Africa and Malawi.

Before joining USAID in 1988 as a Presidential Management Intern, Ms Franchett Trainee program was a Peace Corps Volunteer in Niger from 1984-86. voluntary Franchett Ms. Peace in Niger in 1984-86.

She has a Master’s in Public Policy at the Humphrey Institute, University of Minnesota and a Bachelor of Science from the University of Wisconsin in Madison in political science. A native of Minneapolis, Minnesota, Franchett has family ties with Senegal. On heris first tour in Senegal, she met her husband Bamba Ndiaye, a native of Saint Louis. They have two sons, Alboury and Leo.

USAID is the International Development Agency of the Government of the United States, one of the most active in the world in this field. In Senegal, USAID works closely with the Government to implement a portfolio of approximately 110 million dollars per year (67 billion CFA francs) in the areas of health, economic growth, the Agriculture in the broad sense, education, and good governance.