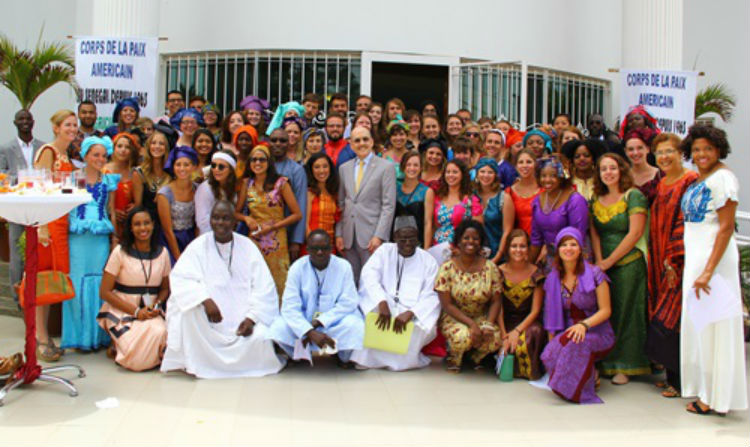 In the presence of the U.S. Ambassador to Senegal, James Zumwalt, and of the Deputy Secretary General of the Senegalese Presidency, Oumar Samba Bâ, 60 new Peace Corps Volunteers took their oaths on May 8 and officially began their service in Senegal as Community Health and Community Economic Development Volunteers.

This ceremony, organized at the residence of the U.S. Ambassador to Senegal, marked the end of the Volunteers’ 10-week training program.  They will work with the Senegalese people as they serve as Volunteers for two years, posted to regions to work in priority sectors.

The government of Senegal identifies which sectors should be priorities, and where the Volunteers are most needed to serve.  According to Peace Corps-Senegal Director Cheryl Gergory Faye, “the role of the Volunteer is essentially to reinforce individual and organizational capacity on the community level, which allows active community participation in reeducation of its own culture.”

According to Ambassador Zumwalt, “Peace Corps embodies the best of America:  service to others in the pursuit of peace and development.  Many say, and I agree, that it is one of America’s best investments in development and in people-to-people relations.”  In his speech, he mentioned that their predecessors achieved notable achievements.  “The Health Volunteers who served before you have done tremendous work in helping to prevent and treat malaria, to improve maternal and child health, and to adopt best practices in health, water and sanitation.  The Community Economic Development Volunteers have made significant contributions towards enhancing business growth and job creation, increasing productivity and income of women’s and youth groups, and increasing financial management at the household level.”

Senegal counts over 250 Peace Corps volunteers working in sustainable rural agriculture, urbane agriculture, environmental education, health education, agro-forestry, small enterprise development, and eco-tourism.  On January 17, 1963, representatives of the Senegalese and U.S. governments signed a memorandum of agreement on Peace Corps working in Senegal.  Since then, over 3,000 Volunteers have served in villages and cities all around Senegal.