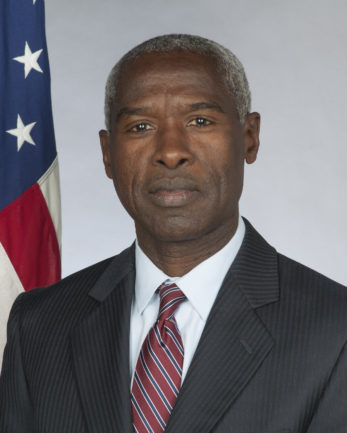 Tulinabo S. Mushingi, Ph.D., was nominated by President Trump on February 28, 2017 and confirmed by the U.S. Senate on May 18, 2017 to serve as Ambassador to Senegal and Guinea-Bissau.  Prior to this appointment, Dr. Mushingi served as Ambassador to Burkina Faso from 2013-2016.  Ambassador Mushingi served as Deputy Executive Secretary in the Executive Secretariat and Executive Director of the Executive Office of the Secretary of State from 2011 to 2013.  He served as Deputy Chief of Mission at the U.S. Embassy in Ethiopia from 2009 to 2011.

Ambassador Mushingi also served in Kuala Lumpur, Malaysia; Maputo, Mozambique; Casablanca, Morocco; Dar es Salam, Tanzania; the Bureau of Intelligence and Research; the Bureau of International Organization Affairs and the Bureau of Human Resources. He is the recipient of numerous awards for outstanding leadership.

At the Foreign Service Institute from 1989 to 1991, Dr. Mushingi co-supervised one of the largest FSI language sections. He worked for the U.S. Peace Corps in Papua New Guinea, DR Congo, Niger, and the Central African Republic, was a visiting lecturer at Dartmouth College and taught at Howard University.

Ambassador Mushingi received a Ph.D. from Georgetown University and a M.A. from Howard University.