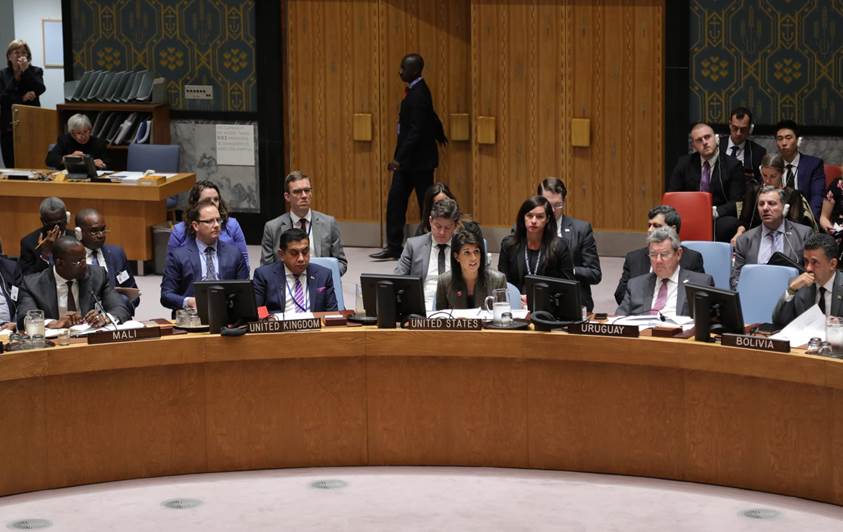 Thank you, Mr. President, and thank you, Secretary-General Guterres and other briefers, for being here today. I thank France as well for its leadership on the issue and for organizing today’s discussion.

Violent extremism in the Sahel is a growing problem. And responding to this violence is more dangerous than ever. We applaud the men and women of the armed forces of the G5 Sahel countries. We also salute the region’s partners, particularly France, with its longstanding counterterror operation. And we thank the brave men and women serving in the world’s most dangerous peacekeeping mission in Mali. All these forces and missions have lost personnel. Civilians have also been the victims of violence across the region, including the tragic attack in Burkina Faso in August.

Many, many families have lost loved ones. Earlier this month, four members of our special forces and five members of the Nigerien army were killed on the Mali-Niger border while working together as partners to ensure peace in a threatened region.

But it is not just violent extremism that plagues the people of the Sahel. Crime is also a growing problem. Historical trade routes across the region provide an opportunity for some of the worst actors in the continent. Criminals who traffic in drugs and human beings seek to profit from the chaos in the Sahel, and they are succeeding, to the detriment of human security in West Africa.

On this Council’s mission to the Sahel region last week, the Security Council witnessed the dedication of government officials, officials from the Group of Five Sahel, members of civil society, and the UN peacekeeping mission to a brighter future. These men and women are fighting an expanding threat that is mobile, resilient, and has little respect for life. Their dedication is not only admirable but worthy of this Council’s continued attention and support.

The United States supports the G5 countries’ initiative to develop a joint force and deepen cooperation, which has the potential to improve security and complement the efforts of the peacekeeping mission in Mali.

Toward that end, the United States will continue its longstanding bilateral support to the G5 members’ security forces. We will also continue to work closely with our partners to help the G5 force be effective and well-coordinated with other counterterror efforts in the region.

The United States is committed to stabilizing the Sahel region. We are proud to announce today that we plan to provide up to $60 million in bilateral assistance, which we will work with our Congress to identify, to help stand up the joint force.

We understand the force will need ongoing support and are eager for opportunities to work closely with our partners to make this effort a successful one. But we believe that the G5 force must be, first and foremost, owned by the countries of the region themselves. We expect that the G5 countries will take on full regional ownership of the force within a period of three to six years, with continued U.S. engagement. This is the approach that will be most effective, in the end, in freeing the region from terror.

We are inspired by the region’s effort and intent, but we have reservations about encumbering a large peacekeeping mission with tasks it would not traditionally perform. The mission in Mali has struggled to reach its full troop authorization. It continues to suffer from a lack of enabling equipment, and it expends most of its resources protecting and resupplying itself. What is more, the mission is coming under increasing attack from violent extremists and shifting operations and locations. For these reasons, the mission struggles to execute its strategic objective – to support the peace process in Mali. Its ability to focus on its core objective could be further compromised by a mandate to support a force with a broad concept of operations and recurring needs. We owe it to the troops as well as those who have lost their lives to protect the mission’s vital resources from further overstretch and ensure they are devoted to supporting a political solution in Mali.

I note that we also have serious and well-known reservations about using UN resources to support non-UN activities. We will each bring different strengths, insights, and resources to bear on addressing insecurity in the Sahel. We look forward to discussions with our Security Council colleagues in the coming days on how best to bring this force to life. We know that security alone will not solve the complex and entrenched challenges in the Sahel, and we applaud the G5 for encompassing aspects of resilience, governance, and infrastructure in addition to security.

The mass closure of schools and the loss of safety and opportunity that comes from extremist violence threaten an entire generation. For many, the temptation to join the extremists is strong. We cannot abandon the people of Mali, Niger, Burkina Faso, Mauritania, and Chad to this fate. A long-term solution must be found. As the G5 Sahel Joint Force continues to evolve, any security gains must be consolidated by bringing good governance.

In Mali, interim authorities in the country’s north need to deliver services to show the local population their presence will deliver concrete improvements for the Malian people. The United States will continue to work closely with regional stakeholders and partners to identify the needs of the force and tailor our support as effectively as possible. We look forward to participating actively at the donors’ conference in Brussels that will help the force move closer to directly addressing and defeating this threat.

As with all peacekeeping missions, we must see the government working with MINUSMA toward achievable outcomes and a durable political solution. Real progress here would provide the surest path to more security in the region.

In closing, let me reiterate our strong support for the undertaking of the G5 countries. We welcome this regional ownership of security and stabilization in the Sahel. We will continue to stand with the people of the region as they take these important steps toward peace and security.