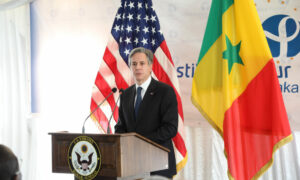 MR SALL:  Mr. Secretary, distinguished guests, let me tell you that it’s a great honor and privilege for us to welcome you at Institut Pasteur de Dakar.  Institut Pasteur de Dakar is a place of longstanding collaboration between United States and Senegal for research, public health, training that can be traced back to the early 30s when American and French scientists worked together to develop the first vaccine for yellow fever in 1937.

Today, this collaboration is even more vibrant and active and involves Senegalese and American scientists in a major program for research on emerging disease, surveillance and epidemic response, student exchange program supported by United States National Institutes of Health, the U.S. CDC, and the Department of Health and Human Services.  The COVID-19 has really impacted significantly our continent and is still a major threat for our future, because as you know, we have the lowest vaccine coverage at the global level.  That situation has led our president, Mr. Macky Sall, African Union, and Africa CDC to request Institut Pasteur de Dakar to leverage its expertise and eight-decade experience in vaccine manufacturing to contribute to the supply of COVID vaccine in Africa.  This is how we started this MADIBA project nine months ago.

Our ambition is really to impact COVID-19 pandemic by delivering COVID vaccine in Africa for Africa before this pandemic ends.  We also want to establish large capacity for future pandemics, epidemic, and also for routine immunization.  We really looking for partnering with company in pandemic preparedness space in the U.S. and elsewhere, and we are really looking forward to establishing cell culture and RNA messenger capacity for many vaccine important for us, the end goal being to support Africa vaccine autonomy in collaboration with as a regional – that African Union is working on.

In this mission, the support of the U.S. Government is more than welcome.  As the U.S. build more than a billion dose of capacity for future pandemic, IPD remain prepare to really finish some of this dose for Africa.  And the novel technology we have fulfill and finish also allow rapid production and distribution and will change the pandemic response now and in the future while still having impact in the pandemic.  IPD is looking for partnering opportunity to bring the technology and vaccine and also funding as well.

In this ambition, we are already supported by several financial institution, including Development Finance Corporation – really support us with an initial grant of 3.3 million USD. And I would like really to express on behalf of my colleagues and the Government of Senegal our deepest gratitude to Mr. Secretary for this support that play a critical role to advance our mission.  As the only WHO prequalified vaccine entity in – on the African continent, we believe that Institut Pasteur de Dakar uniquely positioned to contribute to the establishment of long-term self-sufficiency of vaccine in Africa.

And we build that MADIBA – the project is a true Build Back Better World value driven, high standard, transparent infrastructure partnership, and which will help narrow the large infrastructure needs in the developing world.  For that reason, we are really looking forward to work with the U.S. Government in the near future.

Thank you very much for your attention, Mr. Secretary.  (Applause.)

SECRETARY BLINKEN:  Good afternoon, everyone.  Dr. Sall, thank you so much, not just for your remarks but especially for your leadership of the Institut Pasteur de Dakar, and also for the tour of the facility and laying out not just what you’re doing today but what you’ll be doing tomorrow with the plans for expansion that are very significant and important.  It really is something to see a place like this in person up close, and to think for a minute just about the miraculous leaps of knowledge that are reflected in every vaccine produced here and the capacity of those doses to save countless lives – with yellow fever, with COVID, with other things that may be coming down the road.

And I also very much appreciated, Doctor, meeting members of your team who take great pride, rightfully so, in the work that you do.  And I know we’re eager to do more to help people not just here in Senegal, not just in the region, but around the world.  Today, the institute is manufacturing vaccines for yellow fever, but the driving purpose behind our partnership and investment in the Institute Pasteur is to make it possible for this and other facilities in the region to dramatically scale up their capacity to produce a range of vaccines, including those targeting COVID-19 and other potential pandemics.

Building that capacity is necessary, crucial even, to strengthening health security and future pandemic resilience not just in Senegal but across the continent.  Africa currently imports 99 percent of its vaccines.  It’s also the region with the lowest rate, as we’ve heard, of COVID-19 vaccination in the world.  By increasing vaccine production in Africa, we’ll increase production overall, but we’ll also make it easier, more effective, more efficient to distribute vaccines throughout the continent.  And that is, simply put, going to save lives.

That’s why the U.S. International Development Finance Corporation, or DFC, is teaming up with European partners and Senegalese partners to invest in making the Institute Pasteur a vaccine manufacturing hub.  We’ve committed $3.5 million to bolster vaccine production here.  We’re working to generate more financing from private and public partners.  This contribution is part of a $16 million commitment made together with partners from the European Union, the European Investment Bank, France, Germany, the International Finance Corporation, and Senegal.

As we build up this capacity, the international community has to do everything in our power to save lives now.  A key part of that is ensuring a more equitable distribution of vaccines around the world.  In North America and Europe, more than half the population is fully vaccinated.  In Africa, again, as we have heard, less than 10 percent of the population is.  We have to come together to close that gap.  It’s the fair and just thing to do.  And we also know that allowing the virus to spread anywhere risks the emergence of new variants, and that’s a threat to people everywhere.

The United States is pressing the international community to step up vaccine production, fulfill the pledges that countries have already made, and raise our collective ambition to end this blight. That’s the only way to meet the WHO’s goal of vaccinating at least 70 percent of the world by next fall in every country at every income level within those countries.

The United States is committed to leading with the power of our example.  You see that in the investments we’re making here at the Institute Pasteur.  You see it in the million-plus doses of safe, effective vaccines that we’ve sent to Senegal free of charge with no strings attached, in the more than 250 million doses that we’ve shared around the world, and in the more than 1 billion doses that we will donate by early next year, the first half of 2022.  You also see it in the approximately $10 million in COVID-19 aid that we’ve sent here to Senegal and the more than 5.5 million contributed by our Centers for Disease Control and Prevention.

These resources among other things have supported social media campaigns to teach people how to protect themselves against getting the virus and reinforced the cold chain in this country, the storage needed to keep vaccines working until they actually get into arms.  We see it also in the billions that the United States Government is investing to expand our vaccine manufacturing capacity so that we can produce at least a billion doses a year beginning in the second half of 2022.

Now, part of this is focused, of course, on ending the current pandemic, saving lives right now. But it’s also about making the investments in health security and systems that will detect, prevent, respond to the next infectious disease outbreak, whether it’s here, whether it’s in the United States, whether it’s anywhere in the world.

And that’s the idea behind the Integrated District Health program that we announced just last month, which will invest more than $55 million in Senegal’s public health system.  That’s the largest ever USAID project in this country.  The goal is to bolster health services at the district and regional levels so that people in every part of the country have access to quality, affordable care.  And we’ll bring all that care together under one roof, from maternal and child health to nutrition to family planning.

Here’s the upshot of the systems that we’re building, systems like these:  Not only do they improve overall health, which is fundamental to development and saving lives, but when these services are trusted, when they’re capable and effective, when they’re well-staffed, they provide key hubs of care in a crisis, whether that’s a pandemic, whether it’s a natural disaster, whether it’s a conflict.

Louis Pasteur, for whom this institute is named, once said:  (In French.)  “Science knows no country because knowledge belongs to humanity.  It’s the torch that illuminates the world.”  I can think of few clearer demonstrations of that idea than the current pandemic and our response to it.  Look at the unprecedented cooperation among scientists who’ve shared hundreds of viral genome sequences across institutions and across borders.  That research made possible the discovery of several safe, effective vaccines in truly record time.  The very first COVID-19 vaccine, approved by the World Health Organization, was pioneered by a doctor born in Turkey who grew up in Germany who co-founded a European pharmaceutical company, and that company partnered with an American company to create the vaccine.

Right now, that vaccine and other safe effective ones like it are being produced in New York City, in Mainz, in Pune.  Imagine if those vaccines were also produced in Sao Paulo and Bangkok, right here in Dakar.  That is how global health security will move forward. That’s the work we’re advancing here with our partners in Senegal, and people around the world as a result of it will lead safer and healthier lives.

Thank you very much.  (Applause.)