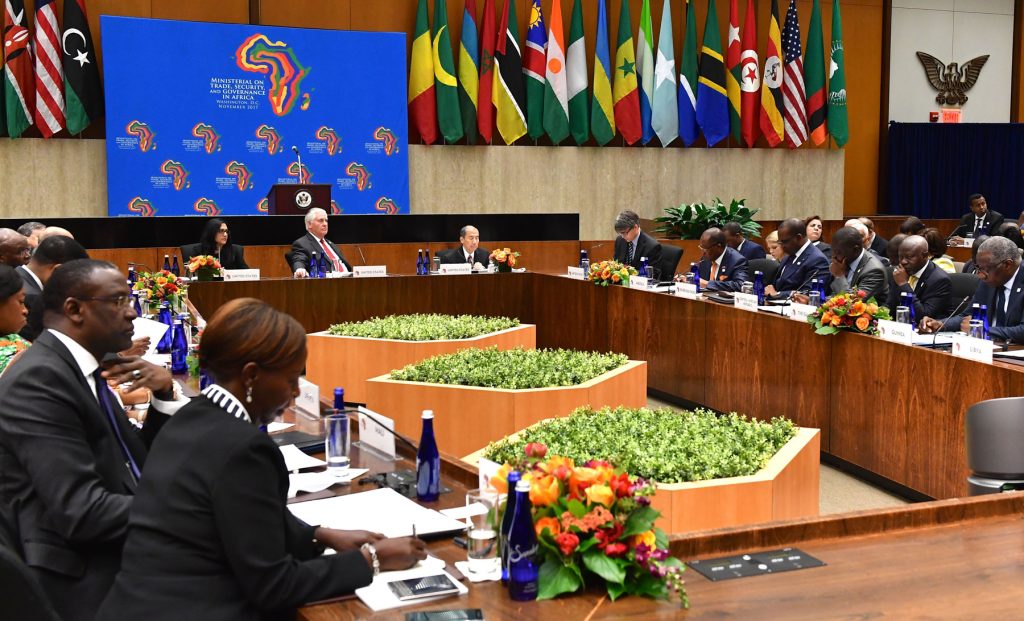 Secretary of State Rex Tillerson met with delegations from 37 countries and the African Union Commission, in addition to representatives from the U.S. and African private sectors and civil society on November 17 to address our cooperation in increasing trade and investment, promoting good governance, and countering violent extremism on the African continent.

During the opening session on increasing trade and investment Secretary Tillerson underscored the vast opportunities for expanding U.S. commercial ties with Africa to support mutual prosperity. USAID Administrator Mark Green highlighted U.S. efforts to foster private-sector-led growth that is increasingly central to supporting economic development in Africa. African Foreign Ministers welcomed the renewed attention on trade and investment and called for greater effort to spur investment in infrastructure and manufacturing industries in Africa.

In the second discussion the Secretary reinforced that governments that uphold core democratic principles and practices to create societies that are safer, healthier, more secure, more prosperous, more likely to lead to economic growth, and more inclined to respect the human rights of their citizens. African partners discussed the importance of democracy in Africa being unique to the cultural context of the continent and its individual countries, while still respecting the fundamentals of good governance, individual respect for human rights, and the rule of law.

The final session on countering violent extremism provided African Foreign Ministers an opportunity to discuss best practices and lessons learned from their countries’ respective experiences in countering radicalization to violence, supporting cross-border cooperation, and protecting soft targets. They expressed gratitude for U.S. support for their counterterrorism efforts, and there was a frank discussion on American support for the G-5 Sahel Joint Force and the Multinational Joint Task Force. African partners also stressed the importance of using comprehensive approaches to counter terrorism and prevent the spread of violent extremism that complement security sector professionalization, with particular focus on addressing the economic, governance, and social vulnerabilities exploited by terrorist organizations for recruitment.