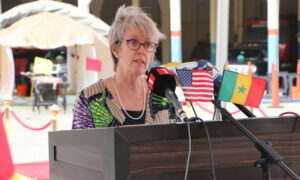 It is a joy to be here today, speaking at a ceremony that recognizes the important safety investments by both the Senegalese Fire Brigade and the United States Defense Threat Reduction Agency, which we call DTRA.

The result of this partnership, which began in 2015, is a unit trained and equipped to the highest international standards.  I’m proud that this fire brigade has already proven itself in national and international exercises. Most recently, its excellence was on display recently in Morocco during the multi-national exercise African Lion-21, where it responded to a simulated toxic industrial chemical and material event at the Port of Agadir. Its skills, tactics, and techniques in using their new equipment to conduct casualty evacuation and mass casualty decontamination of victims at Africa Lion 21 was very impressive.

Seven years ago DTRA began a partnership with Senegal to build a Counter Weapons of Mass Destruction capability within the National Fire Brigade after discovering that Senegal lacked the capability to respond to large Chemical Biological Radiological or Nuclear disasters.  This was a regional concern due to the lack of 100% certainty of disposal of Libya’s chemical weapons stockpile in 2014.  Senegal was interested in creating a unit solely for that purpose. Senegalese soldiers were selected for their ability to learn and perform the complex and technical skills required for this field.  Since then, they have attended 45 training engagements conducted by experts in all relevant specialties from across the United States, Czech Republic, Morocco and elsewhere.

The people of the United States have also donated equipment worth over 1.6 billion FCFA ($3 million), so that the fire brigade can detect, identify, protect, and mitigate these threats at the highest level.

This training and equipment, provided by the United States, combined with the time and dedication by the Senegalese is an example what a win-win situation our two nations can achieve when partnering toward a common goal, as we have done over the last 60 years.

Today marks a transition point within the history of the CBRN Platoon. I would like to thank DTRA for having invested in the unit to the point where they are now, fully trained and competent. The platoon has already responded to multiple events in Senegal, having assisted in the nation’s COVID relief effort, the rescue and oil spill control of the vessel that crashed at Iles de la Madeleine, the derailment of the Industries Chimiques du Senegal train which was transporting phosphoric acid, and excelling in multiple exercises. Now the CBRN Platoon moves forward to work alongside peer units, such as the Vermont National Guard, to continue its partnership with the United States.

I look forward to seeing the future of this unit as a symbol of the deep friendship between the American and Senegalese people, working together to build a safe and prosperous world for our people.

Thank you very much