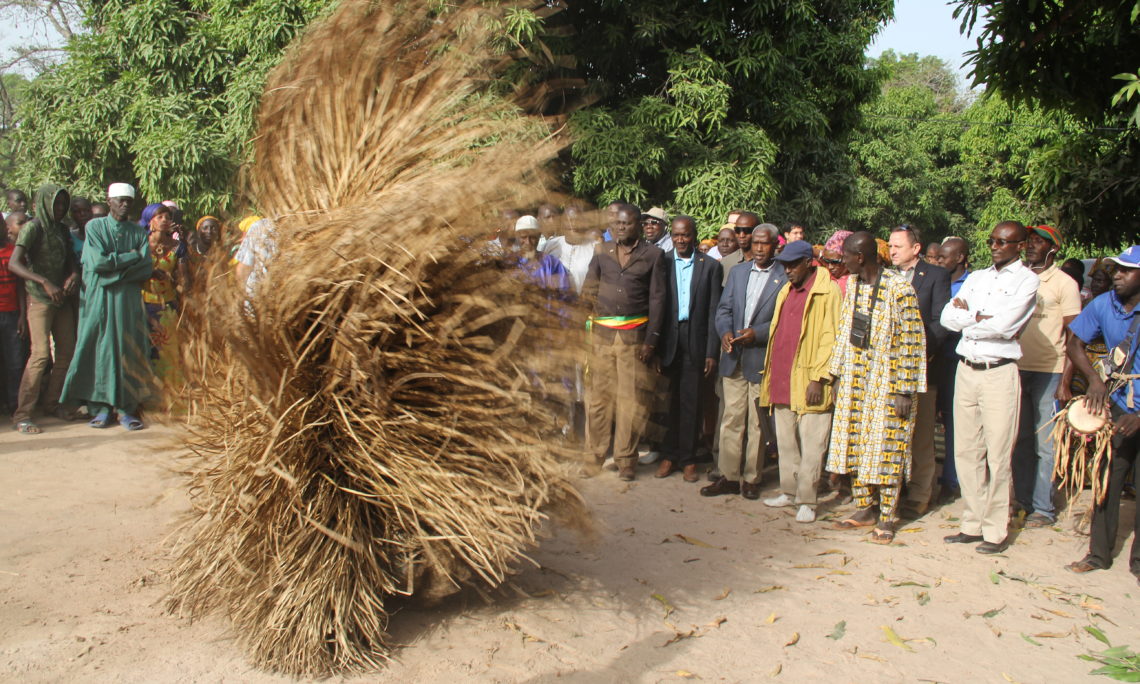 Ambassador Tulinabo Mushingi visited Ziguinchor, Sédhiou and Kolda, the three region of Casamance on the southern part of Senegal, from December 12 to 14 and held several events.

On December 12, Ambassador Mushingi visited Kagnobon in the morning where the Embassy donated funds through the Special Self-Help Fund for the construction of a classroom for 142 students (67 girls and 75 boys).  The Self Help Fund provides small-scale assistance to Senegalese as part of the U.S. Government’s commitment to support development activities. The school received funding to build two classrooms that replaced the eight huts. Kagnobon 2 has a high success rate that reached 91.30 % in 2014.

Ambassador Mushingi then visited the closing ceremony of a USAID Conflict Management Program entitled: “Building Sustainable Peace in the Fogni through Livelihoods.”  In 2014, USAID signed a cooperative agreement with Concern Universal to implement a three-year activity in the Fogni and the cross border villages of The Gambia. The 650 million CFA program contributes to peacebuilding in the Casamance by reducing the number of people in the Fogni who are living in poverty.

On December 13, the ambassador went to see a USAID Neema program in Bounkiling in the morning.  This program helps reduce maternal and neonatal morbidity and mortality.  Neema is part of a five-year, CFA 166 billion USAID health program to improve women’s and children’s health and reinforce adolescent reproductive health by strengthening health services and making them accessible to more people.

In the afternoon, he visited the USAID-funded Assainissement, Changement de Comportement et Eau pour le Sénégal (ACCES).  ACCES reaches at least 50,000 households in six regions, ensuring that 150,000 people gain access to an improved sanitation facility and provide at least 30,000 people with access to an improved drinking water supply.   The CFA 12 billion ACCES project was launched in 2016 in the regions of Ziguinchor, Sédhiou, Kolda, Tambacounda, Kédougou, and Matam.

The morning of the December 14, Ambassador Mushingi will visited an outpatient treatment unit (Unité de traitement ambulatoire – UTA), focused on HIV and AIDS testing, treatment and care.  The center, based in Kolda, provides a comprehensive set of health services – including care and treatment for malnutrition, chronic diseases as well as HIV/AIDS testing and treatment. The Kolda region has the highest rate of HIV/AIDS in the country and USAID provides support to health service delivery points, like this UTA, to implement the Government of Senegal’s Test and Treat program (TATARSEN, Test and Treat and Retain au Senegal) and reduce stigma and discrimination.

On the afternoon of the 14, he went to see the program GoLD in Bagadadji Commune. The municipality partnered with the USAID to strengthen local democratic governance in the southern regions. A multi-stage approach (with key stakeholders including elected officials, municipal officials, local civil society, women’s groups, youth, religious and customary leaders) is raising awareness of the importance of paying taxes. As a result, within a few months, the municipality generated over 4 million CFA in tax revenue, an increase over the 150,000 CFA collected on average each fiscal year.