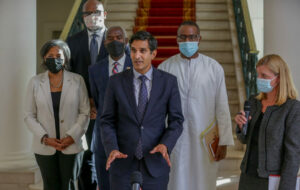 On Friday in Dakar, a White House delegation continued a listening tour to discuss and understand the infrastructure needs of Senegal and the west African region, as well as optimal ways to partner on infrastructure projects under the Build Back Better World (B3W) initiative.

The U.S. delegation also met with representatives from civil society and private companies, including women business owners to better understand their needs and help deliver infrastructure to the people who need it.

During their visit to Senegal the delegation visited the future site of the Institut Pasteur Dakar vaccination manufacturing facility where the U.S. International Development Finance Corporation has provided financing to support Phase 1 of the facility’s construction. Additionally, the delegation visited a Cold Chain Warehouse for which USAID assisted in leveraging private sector financing to market horticultural produce for 650 agribusinesses and 6 large traders.

Deputy Chief Executive Officer of the Millennium Challenge Corporation Alexia Latortue shared the long-term benefits of the U.S. foreign assistance agency’s work in Senegal. “The Senegal Power Compact is an example of the B3W approach in action – a partnership with the Government of Senegal that will contribute USD 600 million to help secure high-quality, reliable electricity through transformative infrastructure and reform investments in the country’s electricity sector that includes elements of climate resiliency, gender inclusion, digitization, and better delivery of electricity to health systems.”

Ambassador Mushingi noted, “Infrastructure that is low-quality or that feeds corruption or exacerbates environmental degradation may only end up contributing to greater challenges for countries over time. Done the right way, however, with transparent, sustainable investment in projects that respond to the country’s needs and engage their local workers to maintain high labor and environmental standards, infrastructure can be a strong foundation that allows societies in low-

and middle-income countries to grow and to prosper. That’s the idea behind the Build Back Better World.”