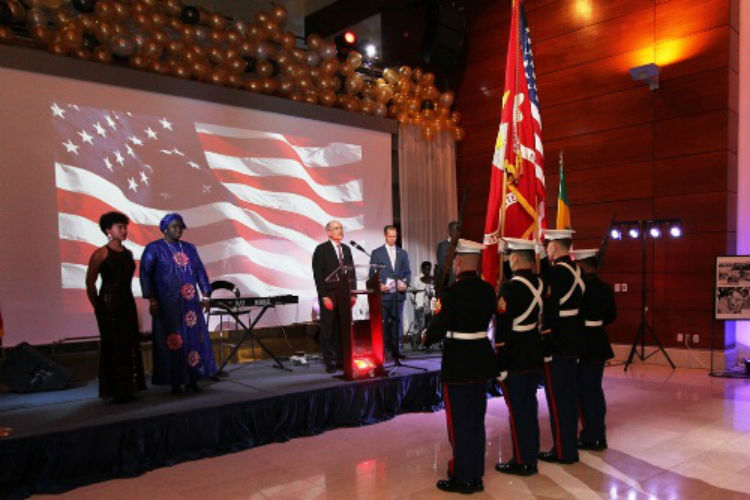 Ambassador Zumwalt presided over the Embassy’s observation of its national holiday. (Photo US Embassy)

U.S. Ambassador to Senegal James P. Zumwalt and Senegalese Armed Forces Minister Augustin Tine presided over the United States Embassy’s observation of its national holiday, officially marked on July 4 — the date that the Republic’s Founding Fathers adopted the Declaration of Independence in 1776 — on Thursday, June 11.  Numerous diplomats and military officials as well as business leaders, religious dignitaries, and other invitees also attended the reception.

Americans often refer to this Independence Day holiday as the Fourth of July, to mark the anniversary of when the founders of our Republic adopted the Declaration of Independence in 1776.  This year, the U.S. Embassy in Dakar chose to gather in advance of that date in respect of many Senegalese who will be fasting in honor of Ramadan on that date.

The Embassy chose a special theme — the glamour of 1960’s Hollywood — for this year’s party in honor of historic moments in our relationship with the Republic of Senegal.

Ambassador Zumwalt, in greeting the many honored attendees, paid respect to the fact that “today, fifty years later, the relationship between the Republic of Senegal and the United States remains strong, robust, and dynamic.  We share an interest in promoting regional security and a willingness to contribute to international efforts to make or preserve the peace.  The United States and Senegal share the dream of promoting economic prosperity at home and around the world in order to build a better and more prosperous future for our children.”

Magnificent fireworks in the Embassy’s gardens capped off the evening for all of those who came to celebrate the 239th anniversary of the Independence of the United States of America.