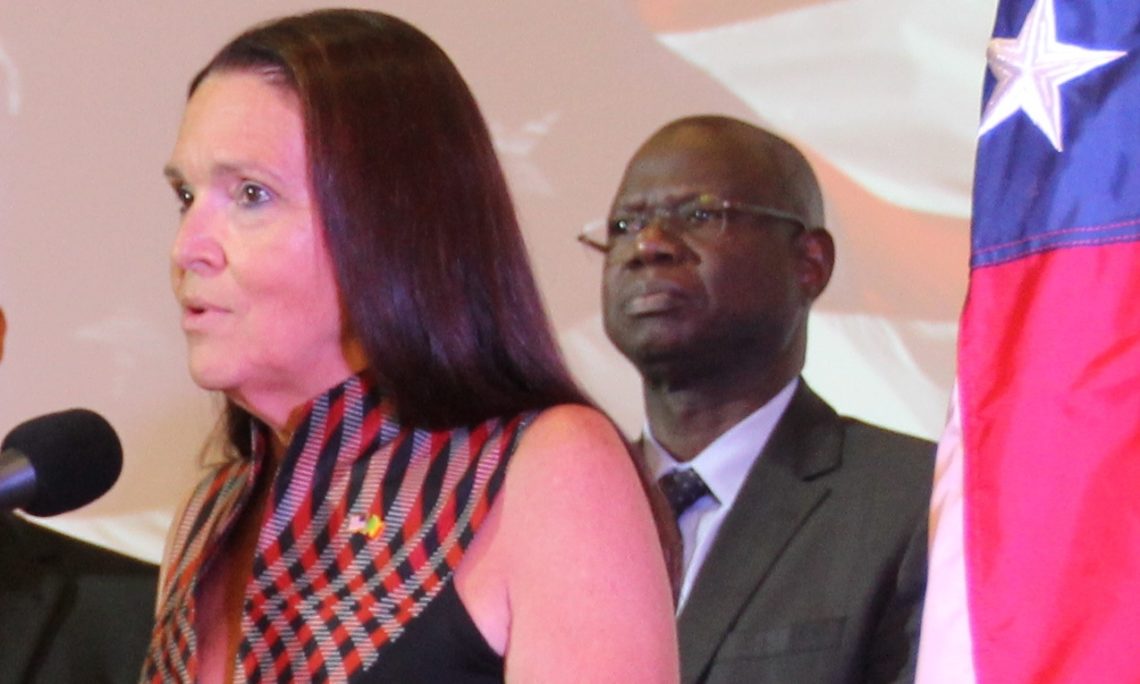 (In Wolof)  Welcome and thank you for attending our Independence Day celebration!

(In French)  Greetings. I sincerely thank you for attending this event at the Embassy of the United States.

(In English)  Before I continue in French, I would like to take a moment to greet our non-French speaking guests and fellow Americans.

My husband, Elie, and I are delighted to be here with you this evening as we celebrate U.S. Independence Day.  While the Fourth of July, our official Independence Day, will not occur for another week, we wanted to ensure that our friends who will soon be departing on holidays would be able to join us.

This is my first July 4 celebration in Senegal.  Since my arrival ten months ago, I have been truly charmed by this country.  The relationship between our countries is founded on deep mutual respect and the firm conviction that the core interests of our two nations are intertwined.  I would like to thank both my compatriots and those Senegalese here tonight who have contributed so much to building this relationship.  Now, I will continue in French.

(In French)  Tonight we celebrate America’s diversity, in terms of both who we are and what we think as individuals.  These differences have shaped our country 241 years ago at its inception, and continue to make it strong.  When I meet people who have travelled to the United States, they nearly always say the same thing.  It is not one country, they observe, but 50 – as if each state were its own country, all with different cultures, traditions, and histories.  The landscapes, the types of foods we enjoy, the different climates, and even our accents and sense of humor!  In this room, we have Americans from across our country.  From Massachusetts where the pilgrims first landed, to California and Hollywood where movies are made, from Texas and the Alamo, to Florida and the Everglades.  We come from all over.  But we are bound together by a deep love of country and a respect for our Constitution.  I would even argue that our flexibility, as a relatively young nation to change and transform with time and under new circumstances is what makes us uniquely American.

As some of you know, I grew up in Germany and in South Africa, and later in Namibia until I landed in the United States when I was in my twenties – and eventually became a U.S. citizen and then a U.S. diplomat.  I am proud to have represented the United States in many countries throughout my career.

American diversity is well represented here at the Embassy.  U.S. diplomats increasingly reflect the broader make-up of the American public, each having a unique family history.  Some have ties in the United States going back generations, even centuries, while others, like myself, are first and second generation Americans.  They or their forebears came from all over the world – in this room we have diplomats with origins from countries such as Nigeria, Liberia, Guyana, Haiti, India, Pakistan, Afghanistan, South Korea, ‎Germany and France to name a few.  They are Christians, Muslims, Jews and Buddhists.  And they are all Americans and are bound by one thing – a pledge to uphold the values of our Constitution.

This quote reminds me of our beautiful mosaic on the Embassy perimeter – constructed bit by bit by a Senegalese and an American artist.  Thousands of small ceramic pieces that together, depict a stunning visual of Senegal.

This diversity is of course, not unique to the United States.  We have a lot to learn from the Teranga of Senegal and from the different ethnic groups in Senegal who live in harmony.

During my time here I have come to learn much about Senegal’s many ethnic groups, religions, languages, cultural similarities and differences.  I watched Catholics celebrate Korite with their Muslim neighbors only a few days ago, and watched Muslims do the same during Christmas last year.  In keeping with the longstanding traditions of Christians sharing Ngalakh with their friends at Easter, I received a bowl of the delightful treat from a colleague.

These are values and traditions that existed before Senegal’s independence and continued with President Senghor and through successive administrations until today.

Diversity is not all that the United States and Senegal have in common.  We share a deep commitment to our partnership in building a better future for Senegal and all of West Africa.

The United States has four objectives in Senegal:  Peace and security, prosperity for the Senegalese people, increased opportunities for trade and investment, and good governance and human rights.  We work with our Senegalese partners to advance democratic values , help Senegal respond to transnational threats, build up and strengthen Senegal’s’ capacity to contribute to multilateral peacekeeping missions, promote inclusive and broad-based economic growth, including access to quality education and health services, and increase U.S. trade and investment.

One story that illustrates the kind of work we do in coordination with the people and government of Senegal and our many U.S. agencies represented in the Embassy is a USAID project I had the opportunity to visit several months ago in the Casamance.  There, I travelled to the village of Niaguis to visit a beekeeping and honey production activity developed between Niaguis and the neighboring village of Sone.  The area around Sone was mined during the conflict, rendering it uninhabitable.  Many of Sone’s residents relocated to Niaguis, which created increasing tension between the two communities as land and natural resource were limited and the villagers were of different religions.

USAID, working with Catholic Relief Services, trained stakeholders, religious leaders, young people, and women in peaceful conflict resolution.  They then supported the communities to come up with a solution that involved creating a shared project, allowing them to work together toward a common goal.  Community members identified beekeeping and honey production as an area of common interest, and participants were given support and training to make and maintain beehives, then harvest and package honey.  They have now joined together to raise bees and produce honey and are working to establish their own local brand for marketing.

Helping a village overcome conflict and grow economically is a small example of the work my Embassy colleagues from 19 different agencies of the U.S. Government do each day to accompany Senegal and Senegalese on the way toward achieving their own goals.

Senegal’s motto – Un peuple, un but, une foi – is very similar to our saying, the latin phrase “E pluribus unum,” or “out of many, one,” which appears on our Great Seal.  These succinct phrases define one of our most important common values.  Out of many cultures, one people.

We — Americans and Senegalese — may have many different opinions and come from very different cultures but we are all united in one thing– a love of country and the desire to pursue our diverse dreams and aspirations and make our countries stronger and more prosperous.

Thank you very much.

Now, I would like to leave the floor to Mr. Augustin Tine, Minister of the Armed Forces of the Republic of Senegal.