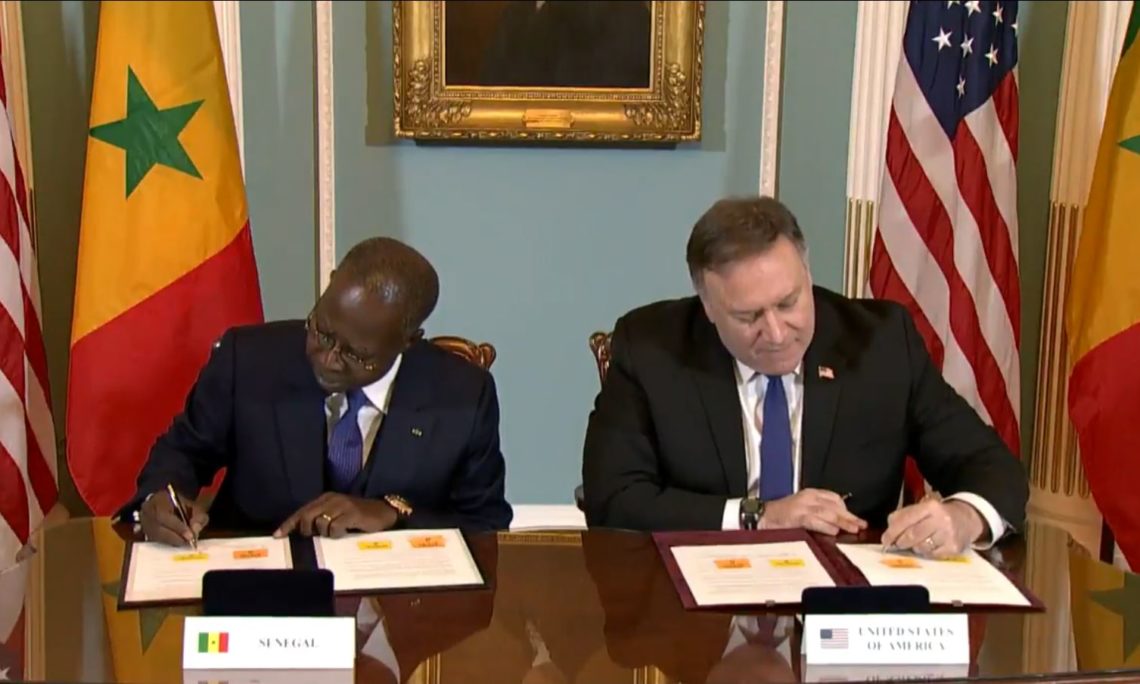 The compact includes $550 million in U.S. funding, with $50 million committed by the Government of Senegal, bringing the total program to $600 million. The United States Government, through MCC,  and the Government of Senegal developed the compact to strengthen the power sector and meet the growing demand for electricity in one of Africa’s fastest growing economies, and an important strategic partner of the U.S. in West Africa. The compact is designed to increase reliability and access to electricity, support economic growth and reduce poverty.

“On behalf of the United States, I congratulate Senegal on the signing of its Millennium Challenge Corporation Compact,” Secretary of State Pompeo stated.  “The United States is committed to spurring economic growth in Africa through partnerships, such as this one.  Senegal’s hard work in meeting MCC strict eligibility criteria is paying off in the form of a rare second MCC compact.  American partnerships – seen through assistance projects like this one – are an essential part of our diplomacy.”

“We warmly welcome this second MCC $550 million Senegal power Compact, a grant of the people of the United States of America, focusing on modernizing and strengthening our transmission network, and increasing access to electricity in rural and peri-urban areas,” Prime Minister Mahammed Boun Abdallah Dionne said.

“We are thrilled to play a critical role in the future of Senegal by improving the country’s energy infrastructure,” added U.S. Ambassador to Senegal Tulinabo Mushingi. “This Compact will help millions of Senegalese by providing reliable and affordable energy.  It demonstrates the United States’ deep commitment to our partnership with Senegal.”

The Senegal Power Compact is expected to benefit over 12 million people and consists of three projects:

The Modernizing and Strengthening of Senelec Transmission Network Project aims to strengthen and increase the reliability of Senegal’s high-voltage transmission network in and around Dakar, the country’s capital, and improve service delivery throughout the country. The compact supports the utility, Senelec, in reducing high production costs, facilitating private sector investment in generation, and increasing the reliability of electricity for consumers.

The Increasing Access to Electricity in Rural and Peri-Urban Areas Project seeks to extend and reinforce the electrical grid in selected rural and peri-urban areas in Senegal’s south and center regions, which have high economic potential but low connection rates. The project will also help residents and business connect to the grid and access electrical equipment.

The Power Sector Enabling Environment and Capacity Development Project will work to strengthen laws, policies and regulations governing the power sector as well as the institutions responsible for implementing them to support long-term economic progress.

The Government of Senegal established a project management unit to work with MCC on the development of the compact, the Unite de Formulation et de Coordination du Second Programme MCA-Senegal (UFC). During the compact development process, MCC and UFC jointly identified Senegal’s greatest barriers to economic growth and developed a program specifically aimed at addressing them. Coordinated analyses helped to determine compact activities most likely to contribute to sustainable economic growth that reduces poverty. Compact development has included a consultative process, engaging civil society, other government agencies, and the private sector.

Learn more about MCC and the Senegal Power Compact.