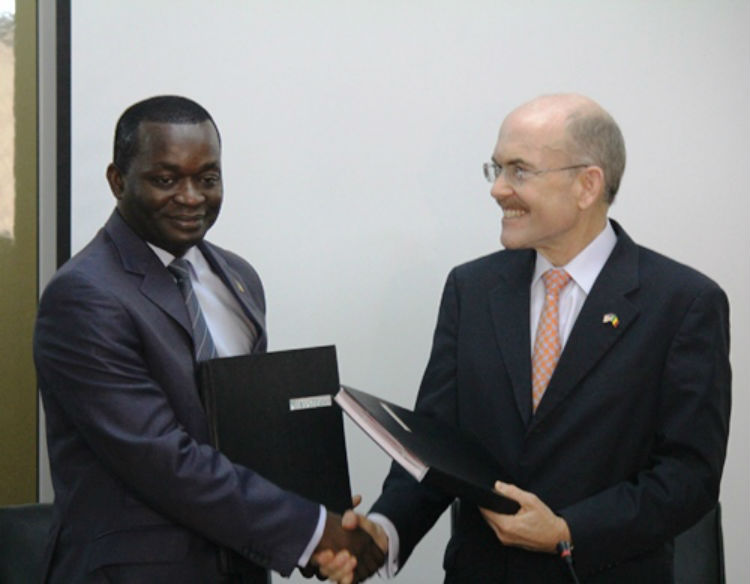 At a July 16 Memorandum of Understanding signing ceremony, the United States Government officially welcomed Senegal into Trade Africa, an initiative launched by President Barack Obama during his visit to Africa in 2013, to build trade capacity and boost the opportunities under the African Growth and Opportunities Act (AGOA).  U.S Ambassador to Senegal James Zumwalt and Senegal’s Minister of Trade Alioune Sarr signed the official document at the Ministry of Trade, Informal Sector, and Promotion of Local Products and Small and Medium Enterprises.  The Trade Africa partnership will help build trade capacity in Senegal and amplify the benefits of AGOA.  Led by the Office of the United States Trade Representative, Trade Africa will also involve additional U.S. agencies such as the Department of State, U.S. Agency for International Development (USAID), Department of Agriculture (USDA) and U.S. Customs and Border Protection.

“It is a pleasure and an honor for me to welcome Senegal into Trade Africa,” said Ambassador Zumwalt.  “This is another example of the strong partnership between the United States and Senegal, which will help Senegal boost trade and attract investments.”

Ambassador Zumwalt added that the initiative’s activities are a “perfect fit with the objectives of the Plan Sénégal Emergent” (Plan for an Emerging Senegal), which include improving the business climate, infrastructure development, and promotion of investment by the private sector.

Major elements of the partnership include strengthening the policy framework for agricultural growth, integration of regional trade in food crops and fisheries, and improved transportation of goods, capital and services throughout the region.

The United States proposed making Senegal the fifth member of Trade Africa from West and Central Africa following a visit by the Deputy Representative of the USTR in June.

Because Senegalese President Macky Sall will join President Obama and other world leaders in Nairobi later in July for the World Entrepreneurship Summit (GES), today’s signature will enable Senegal to prepare the groundwork for the private sector to create more jobs for Senegalese citizens, Ambassador Zumwalt said.

Launched in 2013 by President Obama, Trade Africa promises to increase the internal and regional trade in Africa and strengthen the trade and economic relations between Africa and the United States, as well as other global markets.

Recently extended for 10 years, the AGOA seeks to promote economic development and accelerate the integration of African economies into the global trading system through a framework for governments, private sector and civil society to work together to boost trade and expand trade relations between the United States and the countries of Africa.