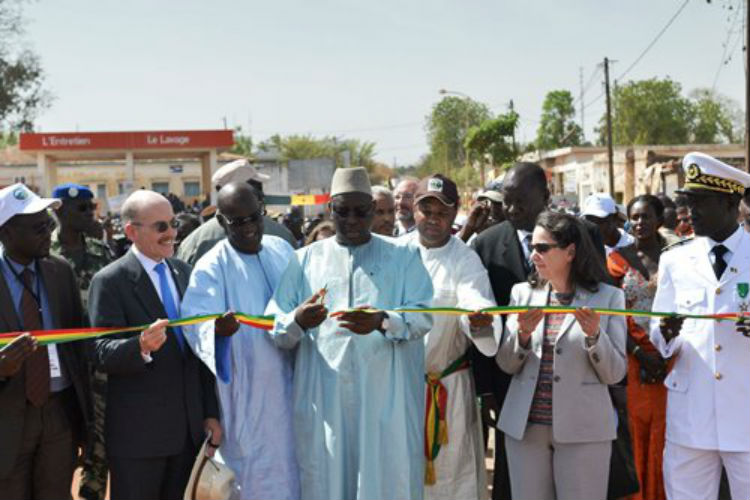 Senegalese President Macky Sall and U.S. Ambassador to Senegal James Zumwalt inaugurated the Abdoul Diallo Bridge in Kolda on Saturday, February 21, 2015.  President Sall stated that this bridge “plays a central role within the plan to modernize infrastructure in the southern regions,” and that it is part of a program that includes “reconstruction of the 252-km Highway #6.”

The U.S. agency, Millennium Challenge Corporation, renovated this bridge at a cost of $8 million, Abdoul Diallo Bridge is 298-ft long and 24-ft wide, flanked by 9-ft wide sidewalks on each side.

Ambassador Zumwalt emphasized the Abdoul Diallo Bridge’s role — as well as all projects of the United States in Senegal’s southern region — as a “joint venture” that aims to “create new economic opportunities in the Casamance.”

According to the top U.S. diplomat in Senegal, this bridge in Kolda is “important” and will help strengthen the connections between the Casamance and the rest of Senegal.  “It is a bridge to a better future for Senegal, to the Sénégal emergent that affords new opportunities to every citizen of this country.”

The Deputy CEO of Millennium Challenge Corporation, Nancy Lee, stated that the Senegalese and American governments work together in bringing this $540 million Compact to fruition.  According to Ms. Lee, this makes road improvements and increasing economic activity in the north and the south of Senegal possible.

Ms. Lee stated that the Compact with Senegal is the Millennium Challenge Corporation’s second-largest Compact in the world.