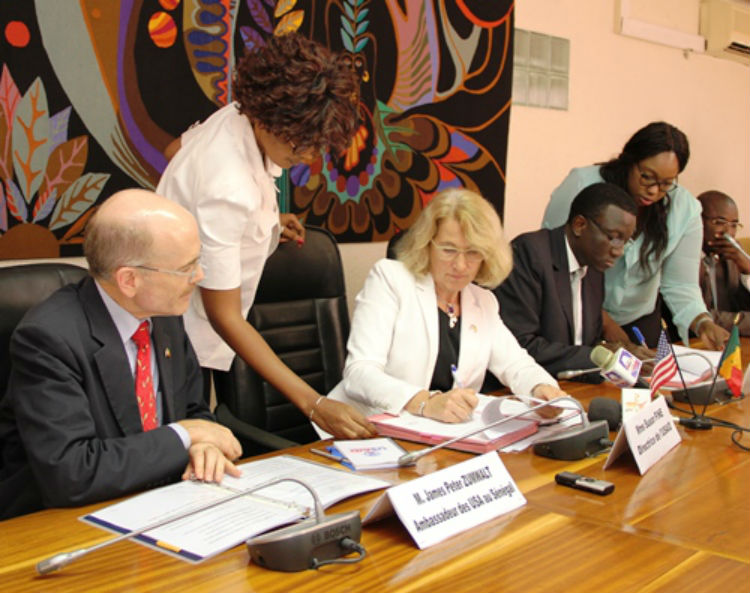 On September 15, the United States through the U.S. Agency for Development (USAID) and the Government of Senegal signed extensions of their current assistance agreements on various areas of intervention supported by USAID, estimated at $466 million (233 billion francs CFA), through the year 2020.

USAID Mission Director Susan Fine and Senegal’s Minister of Economy and Finance Amadou Ba, have signed this Tuesday, September 15 for their respective governments in the premises of the Ministry in the presence of U.S. Ambassador to Senegal James P. Zumwalt and representatives of other ministries.

Speaking at the official signing ceremony, Ambassador Zumwalt reaffirmed the US commitment to help Senegal meet its economic and social development objectives.

“Today’s agreement consolidates our common goals and clearly paves the way for the continuation of the U.S. partnership with Senegal,” he said.

At the ceremony, Ms. Fine said that the aim of these amendments is to more closely align USAID interventions with the tenets of the economic growth strategy Plan Sénégal Emergent, and take account of Senegal’s priorities regarding the UN’s forthcoming Sustainable Development Goals.

“By extending these agreements, we renew our focus on reducing poverty, increasing the quality and equitable access to basic education, promoting food security and nutrition, and supporting the improvement of the lives of people in Casamance,” Ms. Fine said.

Applauding the strong history of collaboration between the United States and Senegal, Ms. Fine said the extended agreements introduce new programs in trade, energy, fiscal decentralization and strengthening of the health system.

Estimated funding for the five years includes $220 million to health; $152 million for economic growth; $76 million for education; and $18 million for good governance.

Agreements covering the last five years have a total value of $463 million allocated as follows $ 179 million to health, $ 168 million for economic growth, $90 million to education and $ 26 million to good governance. The total estimated amount of USAID assistance to Senegal stands at $1.025 billion from 2010-2020.