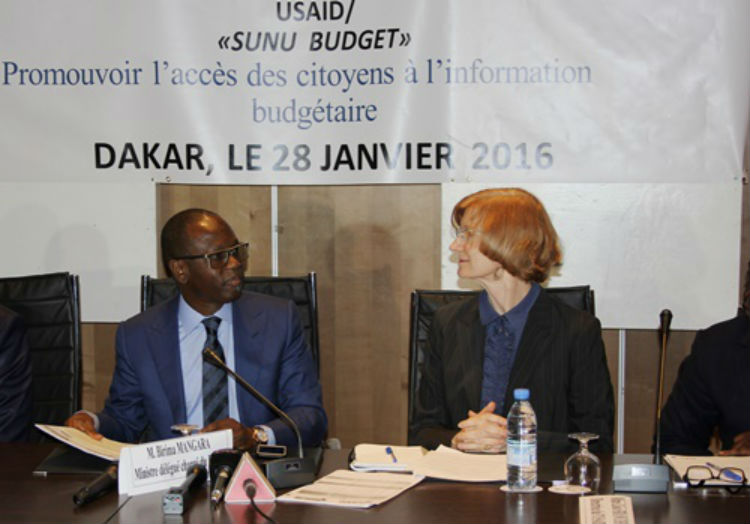 The U.S. Agency for International Development (USAID) launched the second phase of its successful Parliamentary assistance project devoted to public access to budget information. The event was at a ceremony co-chaired by Senegal’s Budget Minister Birima Mangara and USAID/Senegal Mission Director Lisa Franchett on January 28 in Dakar.

Sunu Budget, which means “our budget” in the Wolof language, focuses on fiscal transparency, the heart of democracy and good economic governance, officials from the Budget Ministry and USAID said at the launch.

Since 2012, the Government of Senegal’s website has included budget information, although in a dense, technical format difficult for lay readers to digest and understand. To improve public awareness and comprehension of this information, Sunu Budget will implement a multi-faceted awareness campaign to encourage objective analysis of government statistics by presenting them in a simplified, easy to understand format. A complementary “budget meter” available online will track activity and trends indicated by the data.

“Accessible and understandable budget information available to citizens encourages healthy debate,” Franchett said. “Citizens’ review and audit of budgetary information encourages informed debate and has an impact on daily political decisions. This debate submits the actions of financial administration to review and audit by the citizens who they impact.”

“I am confident that in the near future, Senegal will exceed the world average,” Franchett added. “Sunu Budget will help achieve this goal.”

Ms. Franchett said that one of the challenges faced by Senegal is to publish documents on time and put in place mechanisms to encourage public participation in the budget process.

Senegal’s Budget Minister Birima Mangara said he welcomed the launch of the project to improve public involvement in the budget process.

“Public policy merits strong consolidation by the government,” he said. “Its rightful owners are civil society, the people themselves.”

The Sunu Budget web platform will guide citizens through complex maze of budget information by sorting and highlighting critical fiduciary decisions and movements, helping citizens to monitor proceedings and positively influence the budget guidelines. For those without internet access, the project will conduct a local language communication campaign.

Sunu Budget is an extension of USAID’s Parliamentary Assistance and Civic Engagement PACE) project. Stemming from the success of USAID’s elections assistance efforts ahead of Senegal’s historic 2012 presidential polls, PACE called on prominent local NGO ONG 3D to improve dialogue between citizens and state institutions on public policy and transparent management of the country, as well as assistance to the National Assembly, especially women Parliamentarians.