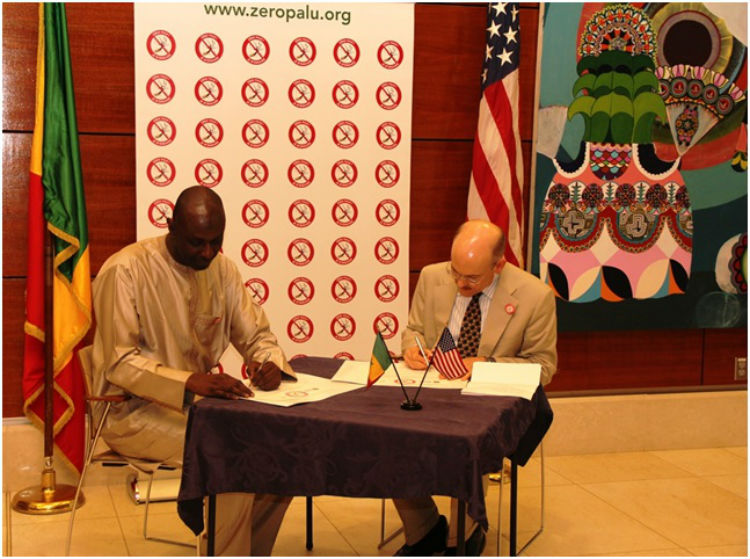 On April 25, governments and public health organizations around the world will celebrate World Malaria Day.  Here in Senegal, the National Malaria Control Program (NMCP) partners with governments, NGOs, private sector organizations, universities and community groups to prevent and treat malaria.  The U.S. government is a proud partner in this effort.

“Between 2008 and 2014, we have seen a decrease from 6 percent to just 1.2 percent in the prevalence of malaria, which leads us to believe that pre-elimination status can be reached in Senegal by 2018, an ambitious but possible goal given Senegal’s efforts,” Ambassador Zumwalt said.  “I would like to reaffirm the U.S. commitment to assist you in eliminating malaria from your country.”  (French below)

The two then signed a declaration pledging to stop the spread of malaria in Senegal. As part of the “Zero Malaria” campaign, the exhibit has been shown around Senegal over the last year. The U.S. Embassy is the final stop for these photos before they are presented to President Macky Sall at the World Malaria Day celebration at the King Fahd Palace Hotel on April 25.

To further raise awareness, the Embassy also released a podcast in both French and Wolof speaking about the ways to combat malaria.  These podcasts are available on the embassy website: https://sn.usembassy.gov/category/health-issues/, and were also distributed to community radio stations around the country.

Peace Corps volunteers in Senegal are also on the front lines of the fight  against malaria. As part of the “Stomp Out Malaria” campaign, volunteers conduct education campaigns and distribute long-lasting insectide-treated bednets. A total of 178 Volunteers participated in malaria prevention activities in 2014, reaching nearly 18,000 individuals in 345 communities.  In 2015, Peace Corps volunteers are competing against each other to increase awareness of malaria,, receiving points for each malaria education activity that is conducted.